Peshmerga on its way to Kobani via Turkey 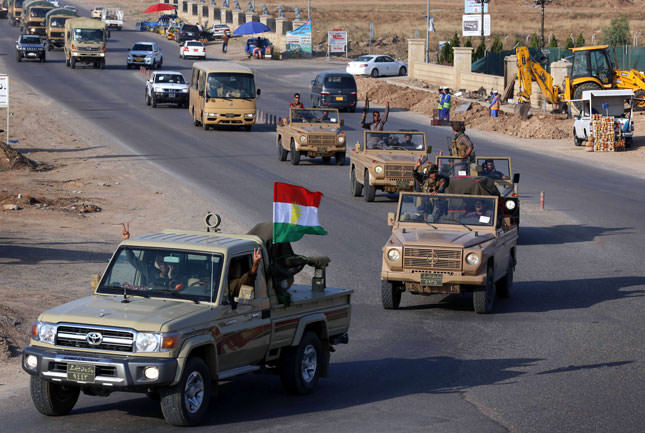 Iraqi KRG peshmerga forces were on their way to the besieged town of Kobani on Tuesday afternoon, according to senior Kurdish officials who said that they are expected to arrive at Turkey’s Şanlıurfa airport

Dozens of Iraqi Kurdistan Regional Government (KRG) peshmerga forces left a base in Northern Iraq on Tuesday afternoon and headed towards the northern Syrian town of Kobani to relieve the Syrian Kurdish forces battling against Islamic State of Iraq and al-Sham (ISIS) militants, according to Hemin Hawrami, a senior KRG official.

An Iraqi source from Irbil said that peshmerga forces were expected to arrive at an airport in Turkey's southeastern city of Şanlıurfa on Tuesday night.

Hawrami announced on his Twitter account that some peshmerga forces were flying from Irbil to Turkey's southeastern province of Şanlıurfa where they will travel to cross into Kobani by land.

Speaking to Anadolu Agency, Halgurt Hikmet, spokesman for the Ministry for Peshemerga Affairs, made it clear that talks over the route of transportation of heavy arms on the ground were finalized and that all schedules were completed for crossing into Kobani.

Hikmet said that peshmerga forces would fight against ISIS militants and rejected claims that they were heading to Kobani only to train Syrian Kurdish fighters and provide logistical assistance.

Hailing Ankara for its efforts to ensure a secure and problem-free access to the town amid some criticisms it has encountered in the Kobani crisis, Hikmet said, "Turkey helped us a lot."

Speaking to AFP news agency, KRG minister of Peshmerga Affairs, Mustafa Qader, said that the deployment is open-ended and peshmerga forces will stay in Kobani as long as necessary.

Later on Tuesday Foreign Minister Mevlüt Çavuşoğlu said that 150 Iraqi peshmerga soldiers will cross into Kobani at any moment.

In a televised interview on A Haber, Çavuşoğlu detailed the logistics of the Kurdish fighters entering the Syrian border town, such as how and from where, and said they would be dealt with by "related military officials."

There are no political setbacks to the issue, Çavuşoğlu said and added, "Turkey has already mentioned several times about helping either peshmerga forces or the Free Syrian Army [FSA] fight against ISIS."

"The FSA has not yet entered Kobani because of disagreements with the PYD," he said. Çavuşoğlu said that talks between the PYD and FSA are ongoing and 100 FSA fighters may enter the besieged city.

Last week, the KRG parliament allowed 150 Iraqi peshmerga soldiers to enter Kobani to aid in the defense of the besieged town, which has been the site of fierce battles between ISIS militants and YPG forces. In an unprecedented move for a Western country, Çavuşoğlu said two days before the KRG parliament's authorization that Turkey will allow Iraqi peshmerga forces to pass through Turkey to Kobani as it was ratified with the Oct. 2 mandate at the Turkish Parliament. Reportedly, a convoy including heavy weapons was seen in Irbil driving toward the Iraqi Kurdish province of Dohuk, but no further information has been obtained on the issue as Daily Sabah went to print. In comments to the Associated Press, a Kurdish official in Kobani, Idris Nassan, said that they have no confirmation that peshmerga forces were to arrive in Kobani on Tuesday. He added that the KRG peshmerga forces may be in direct contact with YPG forces in Syria and, as a result of this, Kurdish politicians in Syria are not aware of the deployment.
Last Update: Oct 29, 2014 12:36 pm
RELATED TOPICS