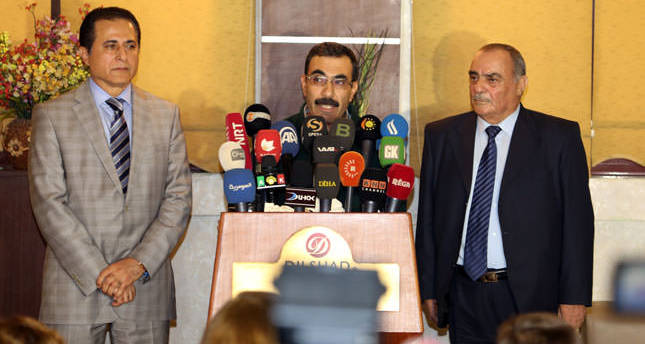 by Fatih Şemsettin Işık Oct 29, 2014 12:00 am
As the Duhok Agreement was signed between the Movement for a Democratic Society (TEV-DEM) of western Kurdistan and the Syrian Kurdish National Council (KNC) last week and reinforcements from the Iraqi Kurdistan Regional Government's (KRG) peshmerga forces are passing through Turkey to Kobani, Syria to help the Democratic Union Party's (PYD) People's Protection Units (YPG) in the fight against ISIS, a mood of optimism is seen among Kurdish political actors. Experts say that although this mood of optimism might seem temporary, Turkey is the real winner of this situation by allowing the transfer of peshmerga forces helping to rejuvenate its reconciliation process, which has become relatively turbulent with the latest developments in the country.

Kurdish political parties in northern Syria signed the Dohuk Agreement on Oct. 22 in Iraq to defend Rojava, the Kurdish-majority area in northeastern Syria, against terrorist Islamic State of Iraq and al-Sham (ISIS) militants. The agreement was announced between KNC, and TEV-DEM and both sides also held a meeting with KRG President Masoud Barzani.

Speaking to Al Jazeera Turk on Monday, Mohieddine Sheikh Ali, the general secretary of the PYD, said, "Kurdish cantons will remain" and "elections will be held in a convenient time period as the agreement requires." According to the agreement, Kurdish cantons in northern Syria will be governed jointly by Kurdish factions while both the PYD and KNC have a 40 percent share of governance and independents will have 20 percent.

While the agreement has repercussions for Kurdish political actors, it is also expected that Turkey's ongoing reconciliation process will be affected by it.

Özge Genç, director of the Turkish Economic and Social Studies Foundation (TESEV) Democratization Program, underscored the fact that the agreement will positively contribute to Turkey's reconciliation process. "[The agreement] is important since the facilitating of confidence between the government, PKK and HDP [Peoples' Democratic Party]. The situation in Kobani has deepened yawning gap between the two sides and thus all the supports of the process were frightened by this event," she said.

Meanwhile, according to reports published on Tuesday, technical details have been resolved regarding the transit of peshmerga forces through Turkey en route to Kobani to fight against ISIS. Foreign Minister Mevlüt Çavuşoğlu made the claim during a live televised interview on Tuesday that logistical details of the Kurdish fighters entering the Syrian border town, such as how and from where, would be dealt with by "related military officials." KRG officials confirmed the same day that a truck convoy carrying heavy weapons left Irbil for Kobani.

Speaking to Anatolia Agency on Tuesday, a spokesman for the KRG Ministry of Peshmerga Affairs, Halgort Hikmat, appreciated Turkey's aid in saving Kobani by allowing the transfer of peshmerga forces. "The Turkish government helped us very much in this issue and made our work easier. We have never faced a problem with them. Turkey did its best to help peshmerga forces going into Kobani safe and sound," he said.

About the possible outcomes of the peshmerga reinforcements, Genç stressed that the allegations against Turkey did nothing for Kobani and have fizzled out. "Both Turkey and Kurds can re-facilitate mutual trust between each other. Following this issue, it is necessary to take substantial stepas in the reconciliation process. Turkey's supporting Kurdish unification in an indirect way is remarkable for relations with Kurds in the region and the process."

Nevertheless, experts underline that unification has occurred among Kurdish factions due to the intensified ISIS attacks on Kobani and the reinforcement by peshmergaforces. They expect that this unification is dependent on the duration of the battle in the Syrian Kurdish region.

Kadir Üstün, research director at the SETA Foundation in Washington, pointed out that the duration of the fight with ISIS will directly influence the balance of power between Kurds, namely the PYD and Barzani's peshmerga forces. "If the Kobani fight is prolonged, that means Barzani's forces will stay in Kobani for a long time. When it feels strong enough and when it thinks the ISIS threat has been pushed back, the PYD may ask the peshmerga to leave Kobani. It is not clear what the actual conditions will look like and if there will be tensions between Barzani's forces and the PYD. Time will tell," he said.

Kobani has been subject to fierce clashes between ISIS militants and armed Kurdish groups since mid-September as well as airstrikes by the U.S.-led coalition since early August.

The town is currently being defended by the YPG, the armed wing of the PYD, which is listed as a terrorist group by Ankara.