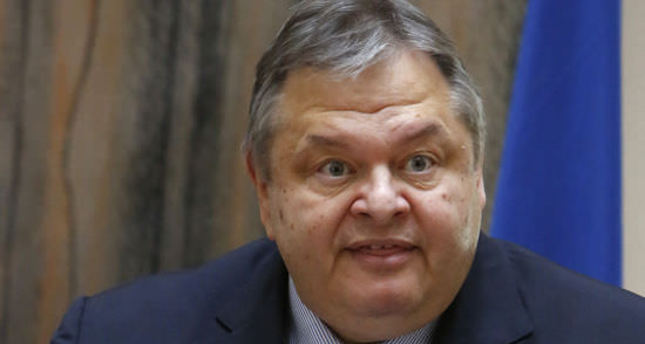 by Daily Sabah with Agencies Oct 29, 2014 12:00 am
Greece's foreign minister says his country will boost its naval presence in the east Mediterranean as part of NATO and U.N.-approved missions making the announcement in Cyprus amid renewed tension with Turkey over oil and gas exploration rights off the war-divided island.

Evangelos Venizelos said Greece would be sending a navy frigate and submarine, denying it was in response to an ongoing Turkish survey mission in Cypriot waters.

Turkey has recently rejected Greek accusations of sea law violations in the waters around Cyprus. "Greece's logic is wrong and Greece is undermining the Cyprus peace talks," Turkish Foreign Ministry spokesman Tanju Bilgiç said in a statement. Greece is experiencing a "misperception" of the peace talks for the island, the statement said.

Turkey and the Turkish Cyprus have strongly opposed any unilateral move by Greek Cyprus to explore any hydrocarbon resources around the island, saying that natural resources should be exploited in a fair manner under a united Cyprus.

"The main aim of the talks is to establish two states in the island with equal rights," Bilgiç said. "Ignoring that and legitimizing the actions of the Greek side clearly cannot help anything." The spokesperson also recalled that steps taken in the eastern Mediterranean while ignoring international law will only cause additional problems.