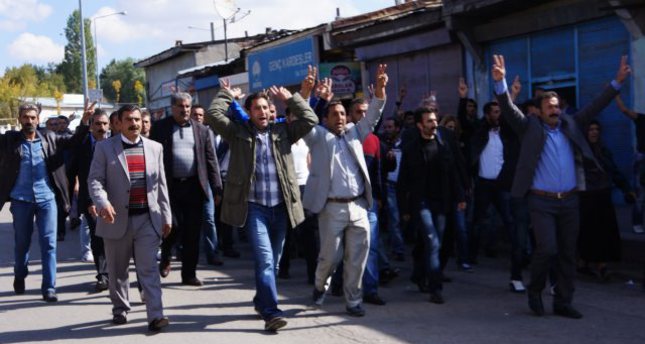 by Daily Sabah Oct 29, 2014 12:00 am
The Peoples' Democratic Party (HDP) has called for a second street protest as part of a global demonstration to be held on Nov. 1 after Turkey witnessed violent protests that morphed into deadly clashes and claimed dozens of lives in early October.

A statement issued by the HDP said that with the global demonstrations, the resistance of the people from Kobani will be supported by the whole world.

According to the statement, Nobel laureates also called for the protest.

The HDP called for demonstrations on Oct. 6 to protest attacks by the Islamic State of Iraq and al-Sham (ISIS) and lack of support from Ankara for the Kurdish Syrian town of Kobani. Ankara accused the HDP of inciting the street violence that caused the deaths of nearly 40 people across the country. After several days of clashes between pro and anti-PKK groups in southeastern Turkey, HDP Co-Chairman Selahattin Demirtaş held a press conference and rejected the allegations that his party and lawmakers had called for mass violent demonstrations saying they called for unity and peaceful protests across the country to draw attention to halt the ISIS attacks.

Following the nationwide protests, HDP Deputy Altan Tan said, "[The HDP] should have been more careful while calling people to take to the streets. We should have considered before and after [the call]. I wish we could do the same as [Devlet] Bahçeli," referring to the leader of the Nationalist Movement Party (MHP).

Underscoring that he did not agree with Bahçeli's political ideology, Tan still praised his stance on the protests.

During the protests, pro-PKK groups set MHP organizations ablaze and attacked MHP supporters. Bahçeli, issuing a statement, called for common sense and noted that no one should take to the streets with MHP flags or slogans to prevent any further clashes between nationalists and pro-PKK groups.