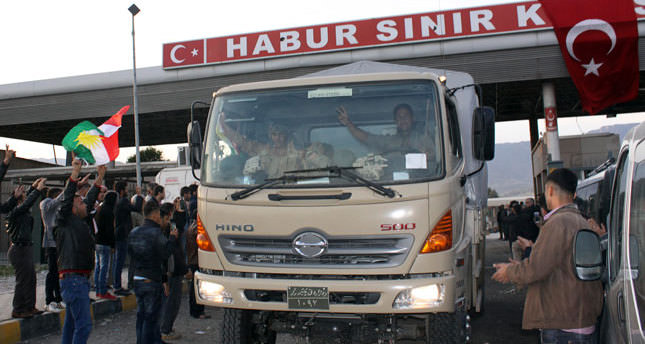 Turkey becomes the conduit for military aid to Kobani, with dozens of Free Syrian Army and Kurdistan Regional Government fighters coming to the rescue against ISIS attacks

A plane carrying 80 Iraqi Kurdistan Regional Government (KRG) peshmerga soldiers landed in Turkey's southeastern province of Şanlıurfa late last night as a group of 200 Free Syrian Army (FSA) fighters, crossed from Turkey to Kobani on Wednesday to help Syrian Kurdish fighters who have faced the onslaught of the Islamic State of Iraq and al-Sham (ISIS) for weeks, according to an official. The peshmerga group, which will cross into the north Syrian town of Kobani to relieve the Syrian Kurdish forces battling ISIS militants, will be traveling to Kobani by land and they are expected to arrive in Kobani on Wednesday night.

Another convoy of peshmerga equipped with heavy weaponry is still on its way to Turkey.

"Two-hundred fighters of the Free Syrian Army have crossed over Syria from Turkey to join the fight for Kobani," said al-Oqaidi, confident that the group, essentially composed of officers and soldiers from defected Syrian armed forces, will be victorious.

"We want the international community and coalition forces to support the [Free Syrian Army], which has been fighting against [ISIS] and the Assad regime," added al-Oqaidi. Last week, the KRG parliament allowed 150 Iraqi peshmerga soldiers to deploy to Kobani to aid in the defense of the besieged town, which has been the site of fierce battles between ISIS militants and People's Protection Units (YPG) forces. Foreign Minister Mevlüt Çavuşoğlu said two days before the KRG parliament's authorization that Turkey will allow Iraqi peshmerga forces to pass through Turkey to Kobani as it was already ratified with the Oct. 2 mandate in Parliament.

A separate truck convoy carrying the peshmerga's heavy weaponry also entered Turkey via the Habur border gate in the southeastern province of Şırnak. The convoy, escorted by Turkish police and gendarmerie units, was heading toward Şanlıurfa where they are expected to cross into Syria to join fighters in Kobani who have been battling ISIS since mid-September.

"All preparations are complete and the peshmerga will leave as soon as possible to help defend Kobani," Halgurd Hikmet, a spokesman for the KRG's Ministry of Peshmerga Affairs, said earlier Tuesday. Turkish security officials have taken extensive security measures at the airport and along the entire route.

Later on Tuesday Çavuşoğlu said that the peshmerga soldiers will cross into Syria at any moment. In a televised interview on A Haber, Çavuşoğlu detailed the logistics of the Kurdish fighters entering the Syrian border town, saying that the how and from where would be dealt with by "related military officials."

There are no political setbacks to the issue, Çavuşoğlu said and added, "Turkey has already mentioned several times about helping either peshmerga forces or the Free Syrian Army fight against ISIS."

Idriss Nassan, a Kurdish official from Kobani, said the FSA group crossed into Kobani through the Murşitpınar border crossing in Turkey. Nassan, who spoke in Mürşitpınar, said they travelled in cars but did not have more details.

The U.S.-led coalition carried out airstrikes against ISIS to relieve the Syrian Kurdish fighters in Kobani, especially the PKK's Syrian wing, the Democratic Union Party (PYD) and its armed YPG. In past weeks, the U.S. resupplied YPG forces in Syria through airdrops, which chafed Ankara even though senior Turkish officials noted that the U.S. informed Turkey before the drops were made.

After the U.S. gave a cold shoulder to Ankara's concerns about supplying Kurdish fighters with weapons, insisting on providing the YPG with arms and supplies, the Turkish government came up with a new strategy of sending KRG peshmerga forces to Kobani to help in the fight against ISIS.

Ankara later held talks with the FSA and vowed to support both forces to the end in their fight to defend the strategic town.

Ankara has been strongly against supporting what it sees as a terrorist organization given that the weapons provided to the organization could, under certain circumstances, later be used against Turkey. Foreseeing the risk, Ankara began seeking alternative ways to contribute to the anti-ISIS coalition such as proposing that the U.S. administration support officially recognized armies such as KRG peshmerga and the FSA instead of the PYD's YPG forces.