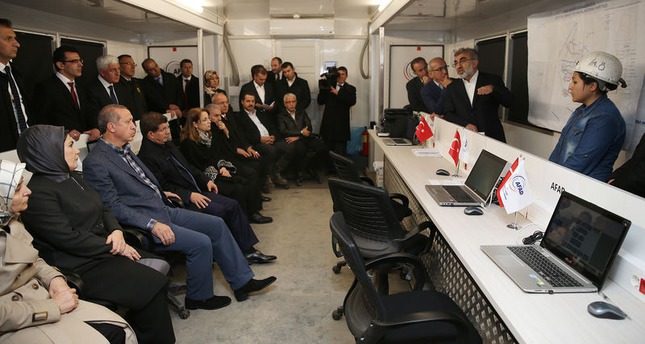 by Daily Sabah Oct 29, 2014 12:00 am
President Recep Tayyip Erdoğan visited the scene of the mine accident in Karaman that has trapped 18 workers inside to monitor the situation on Wednesday as he cancelled his planned Republic Day celebration because of on-going rescue efforts.

Erdoğan said that the Turkish government is using all available resources to rescue the trapped miners after he met with crews of the Prime Ministry's Disaster and Emergency Management Authority (AFAD) and other officials to receive information about the accident.

Earlier in the day, Prime Minister Ahmet Davutoğlu visited the town. Three Turkish ministers-of energy, labor and transport -- arrived at the mine on Tuesday shortly after the incident.

The miners were trapped Tuesday when a water pipe inside a private lignite mine exploded near the Ermenek town in the Karaman province, around 400 kilometers south of Ankara. Earlier reports suggested there were at least 40 miners trapped inside, but latest figures reveal there were in total 34 miners, out of who 18 remain trapped. The rescue efforts are continuing.