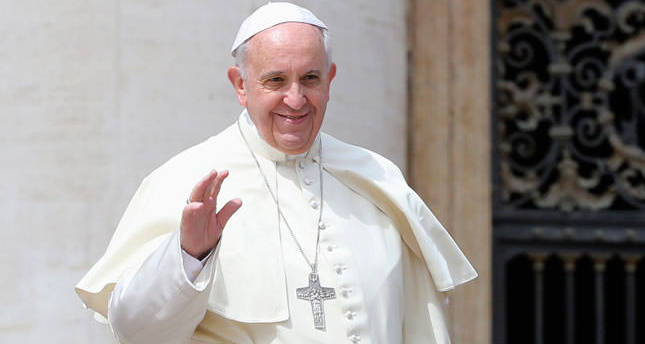 by Daily Sabah Oct 29, 2014 12:00 am
Turkey's envoy to the Vatican, Mehmet Paçacı, said that the upcoming visit of Pope Francis to Turkey carries a vital importance regarding the instability in the region.

Paçacı made remarks about the significance of the visit by Pope Francis from Nov. 28-30. Invited by President Recep Tayyip Erdoğan, Pope Francis sees Turkey as a very important country, according to Paçacı. "Turkey is out of being chaotic contrary to the region. Turbulences and discomforts make Turkey a more important country. The pope is aware of this too." he said.

Paçacı underscored that another objective of the pope's visit to Turkey is to unite people in the region despite the chaotic atmosphere and said, "The present times are quite significant. We can say that the pope will give messages with the desire to end violence in the region and bring peace with the reunification of societies. Turkey being the addressee of these messages is very important."

The historical visit will last three days with many stops for meetings with Turkey's top officials and religious authorities.

The pope's itinerary begins with a visit to Anıtkabir, the mausoleum of Mustafa Kemal Atatürk, in the Turkish capital Ankara. He will later have a meeting with Erdoğan and meet with Turkish Prime Minister Ahmet Davutoğlu. Mehmet Görmez, the head of the Directorate of Religious Affairs, is also among those whom Pope Francis will meet.

After the first day of the trip, Pope Francis will hold a service in the Cathedral of the Holy Spirit and participate in a religious rite at the Greek Orthodox Church of St. George in Fener and hold a private meeting with Patriarch Bartholomew.

This will be the fourth time that Catholicism's highest religious authority will visit Turkey after Paul VI, John Paul II and Benedict XVI.