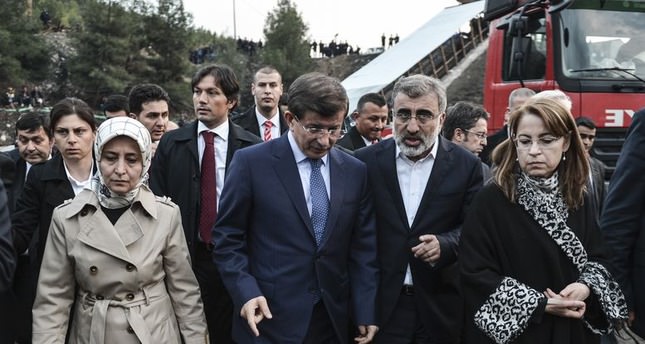 by AA Oct 29, 2014 12:00 am
Turkish Prime Minister Ahmet Davutoğlu has said if negligence is deemed to have led to the mine-flooding disaster in central Turkey, where 18 miners remain trapped, those responsible will be held to account.

His comments came on Wednesday, a day after dozens of miners became trapped when a water pipe inside a private lignite mine exploded near the town of Ermenek town in Karaman province, about 400 kilometers (250 miles) south of Ankara.

The Turkish Prime Minister said in a press conference at the scene of the incident: "Once the mine will be discharged from the water, the real causes of the accident will be revealed."

He said he had met relatives of the trapped miners and he shared their "pain, sadness and sorrow".

"Unfortunately, in many of our mines, because of the continuous work, it is understood that the technological infrastructure has failed to be provided."

He said Turkish mines must be modernized rapidly, beginning with technological innovation.

A search-and-rescue operation is continuing for the 18 workers still trapped inside the mine. Early reports stated 40 miners had been trapped initially, but this was later revised to 34.

Davutoğlu said that a search team was facing difficulties advancing into the mine because of the amount of water, but were doing all they could.

Meanwhile, President Recep Tayyip Erdoğan, who cancelled his planned Republic Day reception because of the ongoing rescue efforts, is reported to be heading to the site in Karaman.

The incident in Karaman mine comes just five-and-a-half months after an explosion at a coal mine in Soma, Manisa, western Turkey, caused the worst mine disaster in the country's history, killing 301 miners.