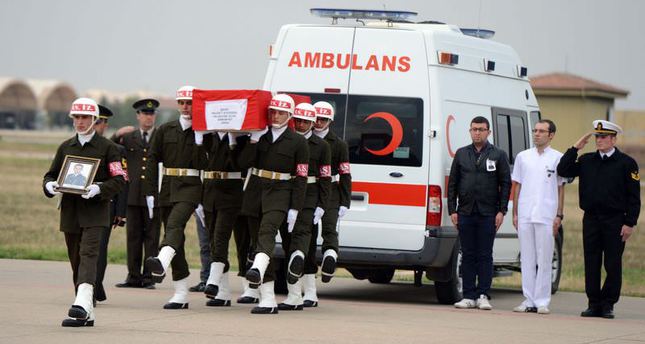 by Daily Sabah Oct 30, 2014 12:00 am
A noncommissioned officer was killed as he was out shopping with his wife in the southeastern Turkish province of Diyarbakır on Wednesday. The attack carried out by masked gunmen follows a similar assassination targeting three off-duty soldiers in the southeastern province of Hakkari last week, which is believed to have been carried out by the PKK's urban youth wing the Patriotic Revolutionary Youth movement (YDG-H).

As the reconciliation process between Ankara and Kurds was believed to be on the home stretch following statements by government officials and the People's Democratic Party (HDP) that the process would reach conclusion in months, killings and sabotage by the PKK came under harsh criticism and marred the negotiations.

Necdet Aydoğdu and his wife were browsing stalls at a marketplace in Diyarbakır's Bağlar district when two gunmen approached the couple and fired. Aydoğdu sustained a wound to his head and was hospitalized, but later succumbed to his wounds.

Turkish security forces rushed to the scene after the attack and launched a manhunt to capture the two gunmen. Eyewitnesses claimed the gunmen had silencers on their guns.

Aydoğdu, off-duty at the time of the murder, was working at the 6th Main Jet Base Command located across from the marketplace. No one claimed responsibility for the attack in the district, which is known as one of the strongholds of PKK supporters.

The Turkish Army announced that the Oct. 25 attack in Yüksekova, which bears a similar pattern to yesterday's assassination, was carried out by PKK militants.

Issuing a statement right after Aydoğdu's killing, the HDP condemned the assassination, adding, "The latest developments show that we are right to be concerned. Turkey is in danger of being dragged into a situation in which the end is unclear."

This statement came with allegations that the HDP is blackmailing the government over the reconciliation process that is about to come to a deadlock due to the recent deadly attacks.
"[The Turkish government is] not obliged and bound to the reconciliation process. If the process fails, everyone will be defeated, including [imprisoned PKK leader Abdullah Öcalan] and political actors," said Deputy Prime Minister Bülent Arınç, rebuking the HDP due to its vague stance and perceived blackmail.

Arınç added that the government shows no mercy to or tolerance for terror activities, referring to the assassinations that began over the weekend.

On Oct. 29, HDP Deputy Chair Pervin Buldan commented on the developments concerning the reconciliation process: "The process is in a deadlock, and negotiation traffic [between Ankara and the Kurdish representative in reconciliation] came to a halt."

She added that the HDP will call to open the negotiations between the parties again in the upcoming days.

Although the PKK pledged to cease its activities after the government launched the reconciliation process to end the conflict, the terrorist organization started attempts to stage a bloody comeback in recent months. The PKK is known for exploiting issues sensitive to the Kurdish community to fuel riots such as the plight of Kurds in Kobani, Syria.

The PKK also hijacked 400 kilograms of explosives in Şırnak, another southeastern province, earlier this week. Authorities are concerned that it may target security forces with explosives in an apparent upgrade of its attacks from harassment fire on security forces to more violent acts. Senior PKK officials denied responsibility for the Yüksekova attack and other recent attacks in the region, though they sporadically issue threats of taking up arms.

Over the weekend, three soldiers – one noncommissioned officer and two privates – were allegedly gunned down by the PKK in the Yüksekova district of the southeastern province of Hakkari. Even though the PKK denies having killed of the soldiers, the Turkish General Army Staff said that PKK militants are perpetrators of the killings in an issued statement.