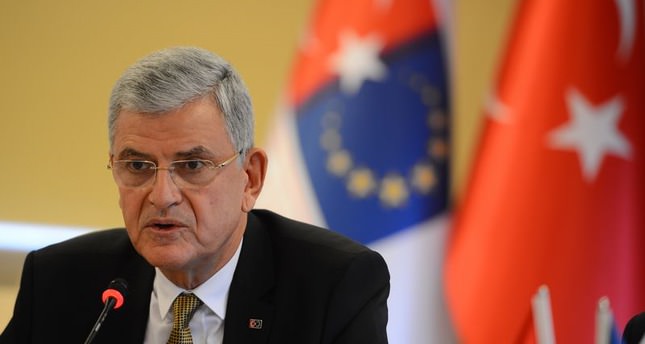 by AA Oct 30, 2014 12:00 am
Turkey's European Union Minister Volkan Bozkır used a press conference Thursday to announce a new 'action plan' detailing the country's future steps in its bid to join the bloc.

The plan, called "National Program for the Adoption of the EU Acquis," will see the launching new pieces of legislation in order to make a headway in policy areas, or 'chapters' requirements which every candidate coıuntry needs to fulfill to become a member.

Bozkır listed the three main pillars of the plan as "determination in the political reform process, continuity in socio-economic transformation in the accession process and effectiveness in communication."

"The National Program for the Adoption of the EU Acquis is a guarantee from Turkey to the EU to pursue the necessary reforms," Bozkır said.

The first stage of the program covers the period between November 2014 and June 2015. It will be comprised of 36 new bills and 142 pieces of secondary legislations.

Bozkir also pointed out that accession to the EU is not a technical process, but a "political one."

So far,14 'chapters' have been opened, while 17 remain blocked and a further four have yet to be discussed. Only one chapter could be opened in the past three years.