US denies claims that US-Turkish relations are "crumbling" 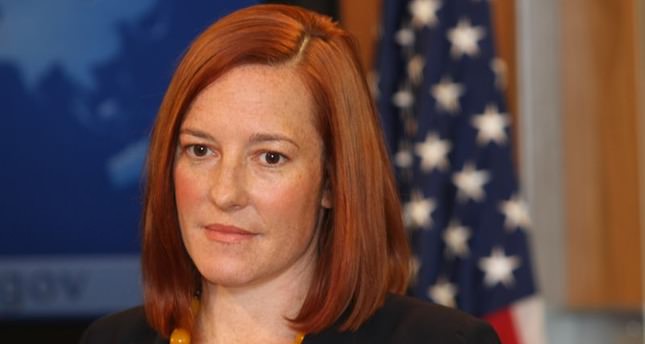 by AA Oct 30, 2014 12:00 am
A media report claiming that U.S.-Turkish relations are in a dire strait should not be believed, the State Department said Thursday.

The Washington Post's Beirut Bureau Chief, Liz Sly, reported that there is an "increasingly hostile divergence of views" between Ankara and Washington, forcing a wedge between the NATO allies as the U.S. leads an international coalition against ISIS.

"At stake is a six-decade-old relationship forged during the Cold War and now endowed with a different but equally vital strategic dimension," she wrote. Tensions have risen to a point where "some are starting to question whether the two countries still can be considered allies at all."

In a marked departure from the typical refusal to confirm or deny, the response from the State Department was summarily dismissive.

"Let me first say that don't believe everything you read because Turkey remains not only an important NATO ally but a partner in these efforts to degrade and defeat ISIS," State Department spokeswoman Jen Psaki told reporters. "We work with Turkey on a range of issues. So I don't think that is the view or experience of this building in any way."

The U.S. has attempted to get Turkey to play a larger role in the international anti-ISIS coalition, but Turkish officials have said they will participate only if the coalition seeks the ouster of Syrian President Bashar al-Assad, a step considered too far for the Obama administration.

Turkey has so far said it would allow Syrian opposition forces to be trained and equipped within its borders, and has facilitated the flow of Kurdish peshmerga forces into the besieged Syrian town of Kobani. But it has prevented U.S.-led forces from using military bases on its soil to launch attacks on ISIS, and has not sanctioned military involvement in the effort.

"We continue to have an active dialogue with Turkey about additional steps they can take," Psaki said.

Turkey is currently hosting 1.5 million Syrian refugees from the conflict.