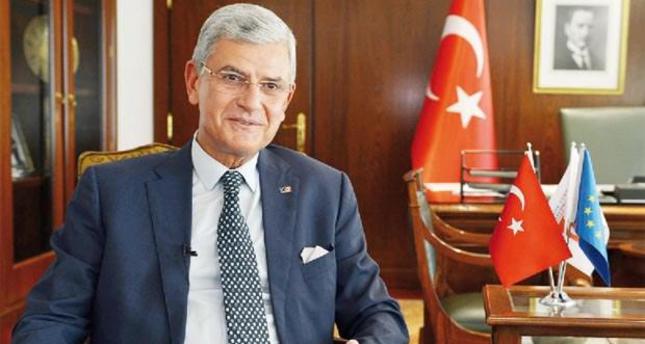 by Daily Sabah Oct 31, 2014 12:00 am
EU Affairs Minister Volkan Bozkır announced the first phase of Turkey's National Action Plan for EU Accession yesterday in Ankara. The plan was prepared in the context of "Turkey's New European Union Strategy" and the announced document is the first phase of the two-phase EU strategy and includes primary legislation, secondary legislation, institution building and other relevant work for aligning with EU legislation from November 2014 to June 2015.

Speaking to journalists at a press conference, Bozkır said that the first part of the plan is an important guide for sustaining and strengthening the political reform process and socio-economic transformation. Bozkır underlined that the National Acton Plan is a road map that puts forth Ankara's priorities to further political reforms and socio-economic transformation within the context of the EU accession process.

Bozkır recently announced Turkey's EU Communication Strategy, which is one of the three pillars of Turkey's New European Union Strategy that aims to eliminate obstacles to EU membership by accelerating the dynamics of EU-Turkey relations.

Speaking at the announcement meeting in Brussels, Bozkır said that the new communication strategy will contribute to Turkish society's internalization process of the socio-economic reforms as well as restoring Turkey's public perception of EU countries. Bozkır added that as part of this strategy, in addition to conventional communication methods, social media and digital technology will be used effectively. According to Bozkır, in order to create the right perception and increase public support for Turkey's EU accession process the communication strategy has both domestic and international dimensions. While the domestic strategy is aiming to increase public support for the EU in Turkey, the main goal of the international dimension aims to change perception in Turkey of the European public. Turkey's contribution to the EU will be highlighted and the "Strong Turkey, Strong EU" message will be emphasized in various communication platforms. Because the perception of Turkey varies greatly in different EU member countries, Bozkır said, "In this context we will develop different strategies for different countries and we are going to implement different courses of action that will contribute to Turkey's image," he said. He stressed that Turkey's current negative perception in some EU countries does not reflect reality and added that restoring this perception will be their top priority in the coming period.