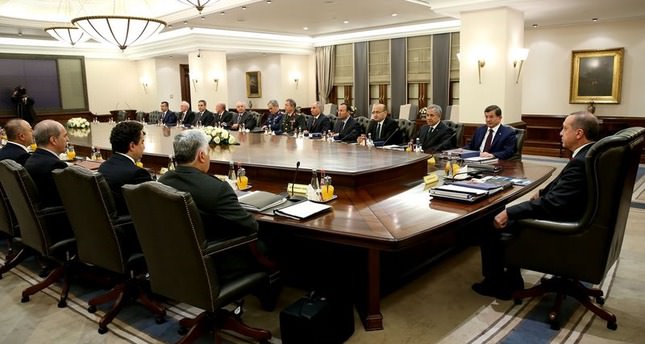 by Daily Sabah Oct 31, 2014 12:00 am
Turkey's top officials held a National Security Council (MGK) meeting under the leadership of President Recep Tayyip Erdoğan on Thursday, which lasted for more than 10 straight hours in the Çankaya Presidential Palace in the capital Ankara.

The meeting has set the record for the longest MGK meeting in Turkey's history lasting more than 10 hours.

According to the statement released after MGK meeting, the Gülen Movement defined as a national security threat by Turkey since it is accused of wiretapping thousands of people including Turkish government officials, encrypting phones and allegedly infiltrating state institutions with the aim of overthrowing the government.

The MGK meeting also focused on the road map to deal with the threat posed by the Islamic State of Iraq and al-Sham (ISIS) and the latest attacks by the PKK, as well as the current situation regarding the reconciliation process.

PKK attacks have included the killing of three Turkish soldiers in the southeastern province of Hakkari last week and the hijacking of about 400 kilograms of explosives from a private coal mine in the southeastern Şırnak province on Monday.
Last Update: Oct 31, 2014 10:21 am
RELATED TOPICS