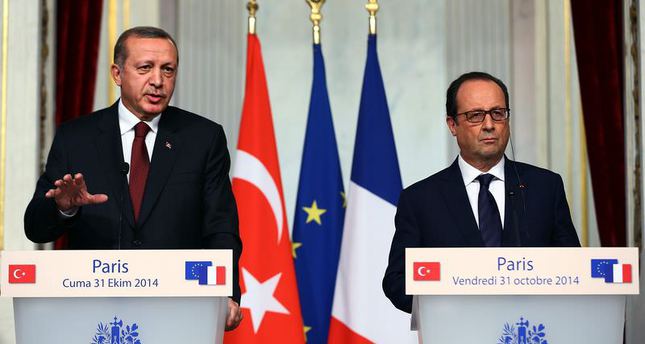 by daily sabah
Nov 02, 2014 12:00 am
President Erdoğan recently, in France, referred to the Islamic State of Iraq and al-Sham (ISIS) as 'Daesh' saying that the vast majority of Muslims finds this terror group despicable. Last week, Foreign Minister Laurent Fabius asked journalists and media organizations to refer to this group as Daesh saying, "This is a terrorist group and not a state. I do not recommend using the term Islamic State because it blurs the lines between Islam, Muslims and Islamists. The Arabs call it 'Daesh' and I will be calling them the 'Daesh cutthroats'.

The name Daesh, according to France24, is a "loose acronym" for "Islamic State of Iraq and al-Sham" (al-Dawla al-Islamiya al-Iraq al-Sham). The name is commonly used by enemies of ISIS, and it also has many negative undertones, as Daesh sounds similar to the Arabic words Daes ("one who crushes something underfoot") and Dahes ("one who sows discord").