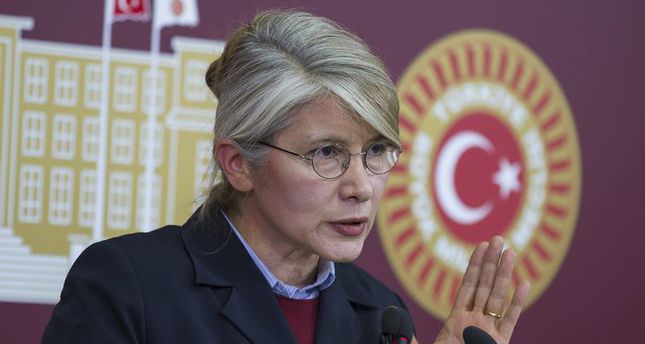 by daily sabah
Nov 03, 2014 12:00 am
The main opposition Republican People's Party (CHP) has been dragged into turmoil following the resignation of renowned neo-nationalist CHP member and Ankara Deputy Emine Ülker Tarhan, who launched a bitter statement against her former party.

CHP Eskişehir Deputy Süheyl Batum yesterday said that he supported Tarhan's statements in her resignation letter and said some CHP members will follow Tarhan's path and resign from the main opposition.

"We are trying to recover the party by shaking it," said the Eskişehir deputy, urging the party administration to adopt stricter policies toward Turkey's critical issues.

Tarhan's resignation came after relations between her and the CHP soured following the presidential elections on Aug. 10, and has since triggered new resignations from party members who share her opinions.

Batum said that there are numerous party members within the CHP who support Tarhan and Batum's views.

"In one or two weeks, lots of our friends [CHP members] will consider the party's condition," added Batum, signaling that new resignations within the CHP will be forthcoming.

On Sunday, CHP Secretary-General Gürsel Tekin asked Tarhan to reconsider her resignation by saying that Tarhan's resignation is a "loss" for the CHP while CHP leader Kemal Kılıçdaroğlu did not adopt as soft a stance as Tekin. Kılıçdaroğlu said, "This is not an issue that has come up only recently. The paths [of the CHP and Tarhan] have already parted."

Tarhan has occupied the party's agenda thanks to her dissident discourse against Kılıçdaroğlu during the last presidential election on Aug. 10 and the extraordinary party congress to elect the party leader in early September. The question has arisen over new resignations from the neo-nationalist members within the party who might follow Tarhan out of the door.

Tarhan on Friday released a bitter press statement regarding her resignation in which she blamed the CHP's administration for their "wrong and weak policies," which she claimed are not representative of the people's sentiments and were not made with winning elections in mind. Tarhan's statement read, "I resign from the CHP after the extraordinary party assembly turned into a competition to gain seats and the disregarding of my call to draw a serious road map, not learning from mistakes made in the presidential elections [on Aug. 10]." She further asserted that the CHP made irresponsible calls during a critical period that saw terrorist activities shake Turkey and that the party had vague policies and incoherent discourses concerning the Oct. 2 mandate. Tarhan's accusation against the CHP was hailed by Prime Minister Ahmet Davutoğlu who claimed that her assertions about the CHP's irresponsible practices during a critical period and their vague policies were 100 percent correct.

According to sources, Tarhan may establish a new party and other resignations from the CHP will follow her to take part in the party that may be established. CHP Deputy Chairman Akif Hamzaçebi dismissed "new party allegations," by saying, "Some media outlets alleged that those who left the party may form a new party. This is not going to happen." Asserting that there is no possibility of establishing a new party, Hamzaçebi said that the CHP wants to come to power in the 2015 national elections and has drawn a road map to achieve this aim in its Antalya meeting.