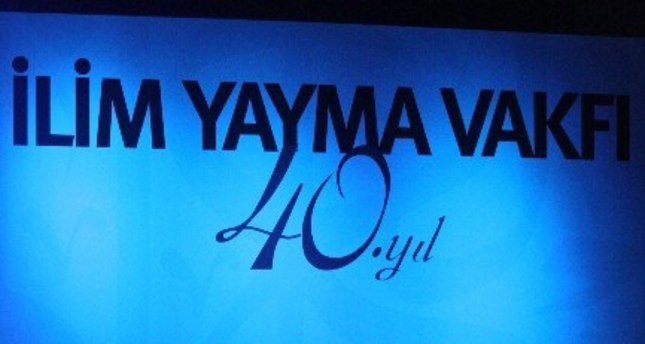 by daily sabah
Nov 03, 2014 12:00 am
The Turkish foundation İlim Yayma Vakfı has denied all the claims that indirectly imply the foundation is linked with the website which reports pro-ISIS news and commentaries, according to a statement by the secretary general of the foundation.

In an article published in Commentary magazine, it is claimed that the terrorist Islamic State of Iraq and al-Sham (ISIS) is backed by the Turkish government through its support for İlim Yayma Vakfı (Foundation for the Spread of Knowledge) – an institution well-known for conducting Islamic education activities.

In the Commentary it is alleged that this foundation has a website publishing ISIS propaganda. "There is a Turkish website called 'Takva Haber' which Turks say serves as the mouthpiece for ISIS. It has been crucial in pushing out ISIS propaganda." It is said that Turkish President Recep Tayyip Erdoğan, his son Bilal Erdoğan and Turkish Prime Minister Ahmet Davutoğlu are among the institution's "founders." Speaking to Daily Sabah, attorney Nurettin Alan, the secretary-general of the İlim Yayma Foundation denied all allegations and stated that their foundation and members of the foundation have no connection with the pro-ISIS website whatsoever. "İlim Yayma Foundation has been operating for more than 40 years and as known by the public, our works are mainly focused on education. Our foundation has had no connection with any extremist organization in its 40 year history, let alone today."

Secretary-General Nurettin Alan also stated that the list of the foundation's founding members has been on their website for years and described Commentary magazine's efforts to link their founders with ISIS as cheap slander. "Our foundation has 113 founding members including President Erdoğan, PM Davutoğlu and some other politicians, and this information has been open to the public for many years via our website. Furthermore, those people have also been members of our foundation for many years," he added.

Commentary is America's premier monthly opinion magazine. Since its inception in 1945 by the American Jewish Committee, the magazine emerged as the flagship of neo-conservatism in the 1970s and still continues to be at the forefront of this ideology.