Biden contradicts himself about his dialogue with Erdoğan, sources reveal 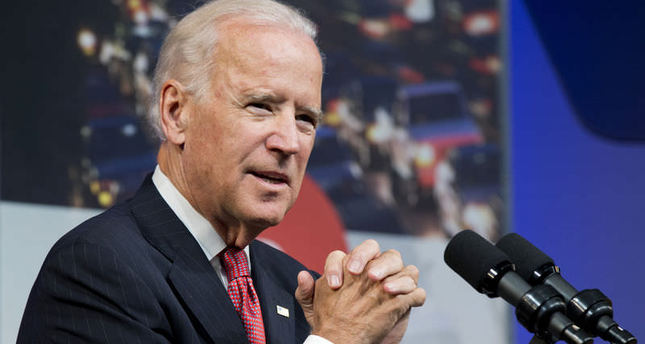 United States Vice President Joe Biden contradicted himself in a CNN interview conducted on Monday after saying he never apologized to Erdoğan over his Islamic State of Iraq and al-Sham (ISIS) comments made at Harvard University. The Turkish presidency sources and records reportedly reveal that during his correspondence with Erdoğan, Biden used the term "apology" more than once.

The White House and U.S. embassy in Ankara had also previously said, in no uncertain terms, that Biden had "apologized" to Erdoğan.

In early October, Biden made phone calls to three U.S. allies as he attempted to smooth over a diplomatic spat sparked by comments he made at Harvard University. One of those calls was to Turkey's President Recep Tayyip Erdoğan, who had demanded an apology and said Biden "will be history to me" if it turned out he'd really accused Turkey of helping fuel ISIS's growth.

But on Monday, Biden contradicted the White House by insisting that phone call didn't amount to an apology.

"No, I haven't apologized," Biden said in a CNN interview. "I never apologized to him. I know him well. I've dealt with him. I called him and said, 'Look, what was reported was not accurate to what I said. Here's what I said'."

In his speech at Harvard, Biden had said that Erdoğan conceded to him that early in the conflict, Turkey mistakenly assisted foreign fighters including ISIS militants seeking to depose the Syrian regime. He made similar comments about Saudi Arabia and the United Arab Emirates, two Arab nations in Obama's coalition.

"They poured hundreds of millions of dollars and thousands of tons of weapons in to anyone who would fight against Assad," Biden said, referring to Syrian President Bashar Assad. He added that some of those assets ended up in the hands al-Qaida-linked groups.

Days later, both the vice president's office and the White House said that Biden had apologized to Erdoğan.

"I think the vice president was pretty candid about why he owed President Erdoğan an apology, because he had mischaracterized his private remarks," White House spokesman Josh Earnest said at that time.

Asked about the discrepancy, Biden's office wouldn't say Monday whether it stood by its earlier statement that Biden apologized. Instead, Biden's office said there had been a "genuine misunderstanding" about Biden's speech, repeating its earlier explanation that Biden never intended to imply Turkey had helped ISIS militants.

"He (Biden) did not intend to imply that Turkey intentionally supplied or faciliated the growth of ISIS or other violent extremists in Syria. As the Vice President also noted, he looks forward to meeting with President Erdoğan later this month," the U.S. vice president's office also said.