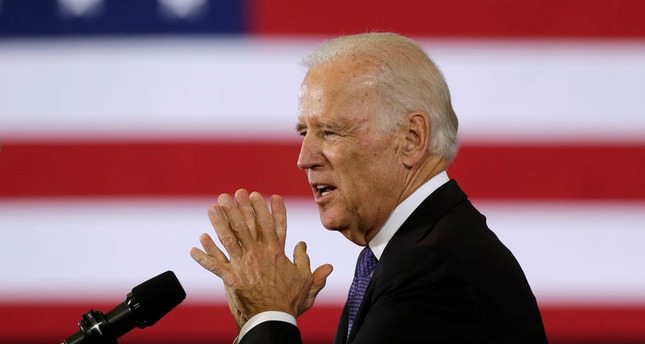 by AA
Nov 04, 2014 12:00 am
US Vice President Joe Biden's upcoming visit to Ankara is unlikely to be undermined by his denial of having apologized to Turkish President Recep Tayyip Erdogan, Turkey's Foreign Ministry said Tuesday.

Bilgic added it would not be correct to make any further comments on this issue.

"I don't think this will create any problems during Biden's visit," he said.

U.S. Vice President Joe Biden had denied in an interview with CNN Monday he apologized to Ankara for his statement about Turkey helping the ISIS and other militant groups in Syria.

"I never apologized to [Turkish President Erdogan]," Biden said. "I know him well. I've dealt with him. I called him and said, 'Look, what was reported was not accurate to what I said. Here's what I said.'"

On October 2, the vice president had said during a speech at Harvard University that Turkey and other U.S. allies in the region, such as the United Arab Emirates and Saudi Arabia supplied or facilitated the development of, the ISIS and other groups fighting the Assad regime in Syria.

These comments angered Erdogan, who said at the time, "Biden has to apologize for his statements," or become "history to me."

On October 4, the White House had released a statement saying, "The vice president apologized for any implication that Turkey or other allies and partners in the region had intentionally supplied or facilitated the growth of ISIS or other violent extremists in Syria."

"The vice president made clear that the United States greatly values the commitments and sacrifices made by our allies and partners from around the world to combat the scourge of ISIS, including Turkey," the statement said.

On October 6, the White House Press Secretary Josh Earnest said, "What the vice president conveyed was an apology for -- as it relates to President Erdogan -- mischaracterizing the president's views in a private conversation. And that ultimately was the reason for the call."

Biden is scheduled to meet Erdogan in Ankara during the week of November 17.