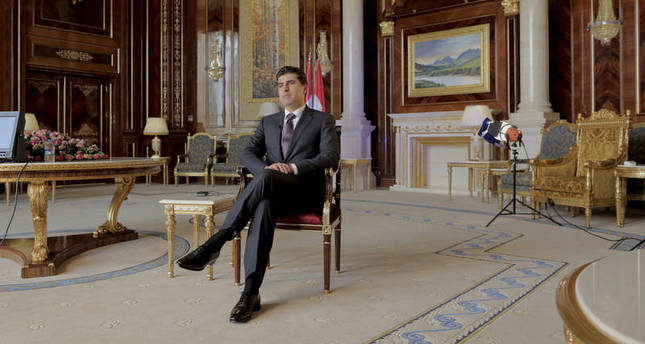 by Daily Sabah with AP
Nov 04, 2014 12:00 am
The prime minister of the Iraqi Kurdistan Regional Government (KRG), Nechirvan Barzani, hailed Ankara's decision to grant passage to KRG peshmerga forces and said, "This wouldn't happen without the Turks."

In an interview with the Associated Press, Barzani said, "For peshmerga forces to move from Iraqi Kurdistan and march across Turkish soil to help Kobani [...] we all know that it was a difficult decision,"

Iraqi Kurdish forces will only stay in Syria "temporarily" to help reinforce fellow Kurds fighting to defend the town of Kobani from militants of the Islamic State State of Iraq and al-Sham, an Iraqi Kurdish politician said Sunday.

Barzani said involvement of KRG peshmerga fighters in Syria is not intended to achieve any political goals, but rather, is geared at the short-term goal of aiding fellow Kurds in the embattled town along the Syrian-Turkish border.

"Our role is to back up the people who are struggling on the ground in Kobani," he said.

KRG peshmerga troops entered Kobani from Turkey's southeastern province of Şanlıurfa last week to push back ISIS militants and reinforce People's Protection Units (YPG) fighters in Syria's northern town of Kobani for 40 days. Along with the peshmerga forces, a group of Free Syrian Army (FSA) fighters, a strict opponent of the Bashar Assad regime, also silently crossed into the besieged town to help the YPG.

Turkey, a necessary member of the anti-ISIS coalition due to its close location to Syria, came under harsh criticism from international media outlets asserting that Ankara does not accept taking a frontline role in the fight against ISIS. Foreign Minister Mevlüt Çavuşoğlu announced that Turkey allowed peshmerga forces to enter Kobani from Turkey in accordance with the Oct. 2 troop mandate.

The ISIS siege of Kobani has turned into a test for the U.S.-led coalition that began military action in early October to halt the ISIS advance. According to U.S. officials, the airstrikes have killed hundreds of ISIS militants, but neither the military action nor the coalition's resupplying of YPG fighters by airdrop have yet yielded the expected results.

Barzani said airstrikes alone will not solve the threat, which he called a "cancer," adding that allied governments must make a more serious effort to arm Kurdish forces.