Turkey steps up support for peshmerga by providing military education 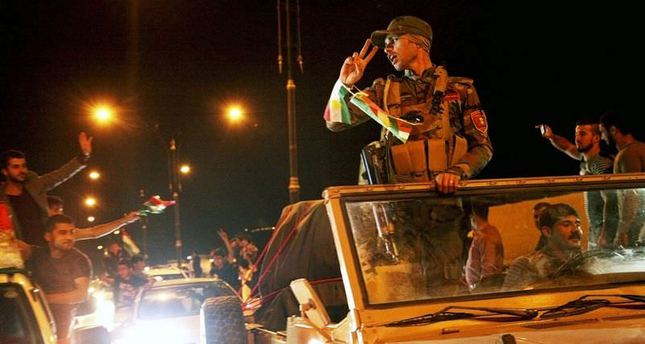 by daily sabah
Nov 04, 2014 12:00 am
Turkey has followed on from its permission to allow peshmerga fighters to enter the country, in order to cross into Syria to battle ISIS militants, by further providing military education to the fighters deployed in Kobani amid criticism that Turkey is failing to support the fight against ISIS.

A group of Iraqi Kurdish peshmerga troops entered Kobani on Thursday. Upon seeing that the ISIS threat is intensifying for the Kurdistan Regional Government (KRG), Ankara has made a further contribution to its fight against ISIS by assigning special forces to give special education to the peshmerga fighters, who lacked experience in fighting on plain land. The special forces, named 'Bordo Bereliler', have been taken from the Turkish troop in northern Iraq.

Since ISIS - which holds parts of Syria and Iraq as part of an ambition to redraw the map of the Middle East - began rising in Kobani, Turkey has been facing assaults from various circles for its so called lack of support to the fight against ISIS. As a response to the accusations, Turkey began increasing its supports for the peshmerga soldiers, which recently crossed to Syria via Turkey to help fellow Kurds battling ISIS.

Ankara was criticized by both the pro-Kurdish Peoples' Democratic Party (HDP) and coalition forces for its reluctance to provide the Democratic Union Party (PYD), which is the terrorist PKK's Syrian wing, with assistance. Turkish officials openly stated that they would never show support to a terrorist organization. Instead, Ankara has come up with another plan to solve the crisis - allowing official forces, who have been recognized by law, to enter the fight against ISIS. The newly introduced plan has been accepted by U.S, despite opposition from the PYD, and has eliminated the assaults it has been facing, which have extended to claims that Turkey is siding with ISIS.

As proof of its sincerity in making contributions to the coalition, Turkey not only allowed peshmerga fighters to enter Turkish territory to cross to Syria, but has also provided the fighters with military education. This covers battle teachings such as fighting at close quarters, using the battle field competently, deploying the howitzers in proper places and concealing the weapons wisely. The peshmerga fighters who are currently fighting ISIS are reportedly chosen out of those who received the education from Turkish soldiers.

Weapon supplies have also been provided for the peshmerga forces in their fight against ISIS, in accordance with an agreement reached by peshmerga ministry and Turkey.

The spokesperson of the ministry stated that the forces deployed in Kobani have been sent new weapons and ammunition, and will continue to be provided with weapons via Turkey when necessary, according to the agreement.