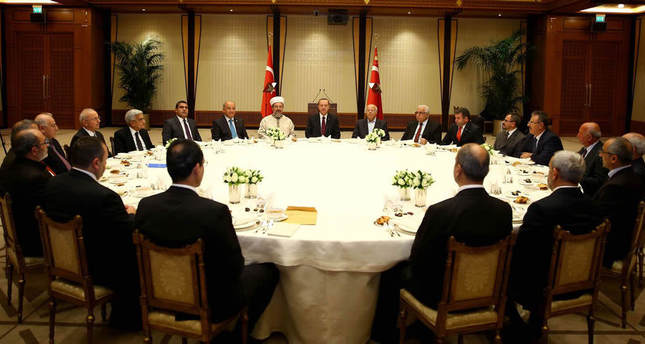 Turkey's new Presidential Palace officially opened its doors on Monday night for the first time to host an exclusive iftar event presided over by President Recep Tayyip Erdoğan for Turkey's leading Alevi citizens. The Alevi community voiced certain grievances concerning their places of worship and education. The Alevi community is fasting during the Islamic month of Muharram, which they refer to as the "month of mourning." Speaking at the function, Erdoğan underlined the notion that unity among different ethnicities and sects can be the only solution to the ongoing problems in the region, while Alevi community leaders expressed their optimism for the government to find a permanent solution to their problems. "Turkey remains the only hope for establishing peace among Turks, Kurds, Arabs and all other ethnic groups in the whole region," Erdoğan said, adding that Turkey has the capability to produce solutions since it has the ability to reconcile ethnic and religious differences.

"We share the same grief, direction and book and we should not allow instigators to instill hatred and division among us," Erdoğan said, addressing Alevis, Shiites and Sunnis in Turkey. He called upon everyone to embrace peace and toleration and pass these ideologies on to the youth to prevent them from falling into the trap of terrorism. He sent the message of peace and unity to all citizens in Turkey.

Commemorating the martyrs of Karbela, and alluding to the brutal killing of Hussein, the grandson of the Prophet Muhammad, Erdoğan said that Hussein taught a lesson to everyone since he demonstrated the importance of sacrifice, patience and staying away from alienation. Erdoğan claimed all of these lessons point to unity and brotherhood among Muslims while pointing out that the region is experiencing violence based on sectarianism. "So-called Muslim suicide bombers in Iraq blow themselves up in mosques, tombs and other places where Muslims of other sects are present," Erdoğan said, continuing that calling themselves Sunni, Shiite, Alevi or Nusayri (Alawite) is insignificant since extremists can only be labeled murderers and terrorists. "A killer is a killer regardless of whether he is a Sunni or a Shiite and terrorist or violent actions should not be associated with a specific sect or belief as violence has no religion," Erdoğan said. He went on to strictly condemn all states and organizations that try to legitimize the use of violence and terrorism under the name of Islam.

Speaking to Daily Sabah, Dr. Talha Köse, an academic who is conducting research on the issue of Alevi rights in Turkey, said that Turkey has played and continues to play the role of a mediator in the region. "When Turkey reaches a permanent resolution regarding the reconciliation process, it will also be able to provide a solution to the crisis in the region," Köse said, adding that Turkey has the potential and the determination to put an end to conflict in the Middle East. He suggested that the reconciliation process is one of the most distinguished developments in the region and that the government's efforts will prove effective despite those who attempt to sabotage the process.

Alevi community leaders have expressed their satisfaction about Ankara's current position regarding their demands. Fermani Altun, the president of the Global Ahlul Bayt Foundation, who was one of the guests of the iftar dinner held on Monday, said that the dinner was groundbreaking as it allowed Alevi leaders to express all of their concerns regarding their status in Turkey. "We were able to voice our concerns about legal and constitutional amendments that need to be made to address our community's problems," Altun said. He went on to say that Ankara has paid special attention to their demands to establish academic institutions to fill the gap of raising new Alevi community leaders, an issue that has been ignored for over 90 years.

Altun also said that the government is determined to restart the Alevi initiative and that Alevi leaders were especially pleased with Erdoğan's determined stance regarding the matter. He hinted that the government would start the Alevi initiative before the June 2015 general elections and said that Alevi community leaders were also impressed with Prime Minister Ahmet Davutoğlu's optimistic attitude to conducting the reforms.

Moreover, Altun claimed that opposition parties have frequently ignored the issues that are faced by Alevis on a regular basis. "The opposition was always in favor of prohibitions and violence against Alevis, and were always closed to reforms," Altuğ said, who added that the Alevi community has full faith in the government ensuring freedom for their beliefs and practices.

But he also gave the caveat that the issues require serious amendments to be made to the laws and Constitution. "Houses of worship are strictly defined as mosques, churches and synagogues in the law," Altuğ said, and outlined that the government needs to change a number of such discriminatory regulations, which were added to the Constitution following the 1960 and 1980 coup. Altuğ also agreed with Erdoğan that resolving Turkey's domestic problems would open the doors for other countries in the region and allow Turkey to gain international prestige for its efforts.
Last Update: Nov 05, 2014 4:03 pm