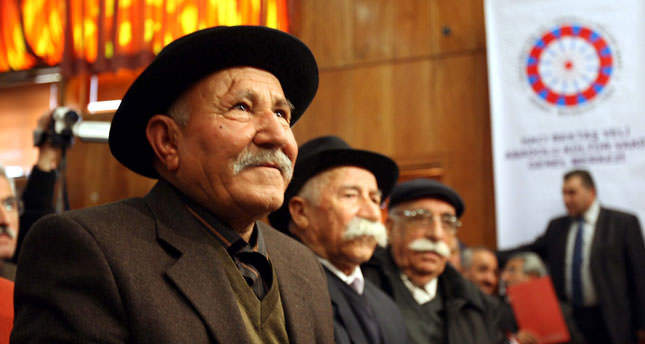 by Nurbanu Kızıl Nov 04, 2014 12:00 am
President Recep Tayyip Erdoğan hosted an exclusive iftar (fast-breaking) dinner, called "Muharrem Aşı," at the Presidential Palace yesterday for Alevi citizens who are fasting in the Islamic month of Muharram. The dinner, which is the first official gathering hosted by the president at the new Presidential Palace, is part of efforts to improve the democratic living standards of Alevi citizens, and comes as Turkey is preparing to proceed with the Alevi initiative.

The month of Muharram is regarded as a month of mourning for Alevis, according to Ali İhsan Şahin, a legal expert and president of the Universal Alevi Bektashi Association. Şahin explained that fasting during the month of Muharram holds a very special place within the Alevi community, as it commemorates the martyrdom of Hussein, the son of the fourth Caliph of Sunnis and first Imam of the Shiite, Ali ibn Abi Talib, at the battle of Karbala.

More importantly, fasting during this month is not only exclusive to the Shiite and Alevis, but is also practiced by Sunnis, who observe it for the sake of God. Şahin praised President Erdoğan's move to invite Alevis for a fast-breaking meal at the Presidential Palace and stated that it is a crucial step for the establishment of unity and solidarity amongst all Turkish citizens, who may have different religious, ideological and ethnic backgrounds.

Şahin explained that he had attended the previous fast-breaking dinner in Ramadan and had the chance to speak with Justice Minister Bekir Bozdağ. "The government has been preparing to resolve the Alevi issue for a long time," said Şahin, who explained that recent crises in the region and their busy agendas have hitherto stalled their plans.

According to Şahin, the government has shared a draft road map with Alevi leaders who are eagerly awaiting the reforms. "If the proposed reforms are passed by the legislation, Alevi citizens' expectations of the past few hundred years will finally be fulfilled" Şahin said, who added that the government has so far responded to their needs. As part of this, the government has turned the Madımak Hotel, the site of the Sivas massacre which killed 35 people, most of whom were Alevis, into a museum, in response to demands by Alevis to commemorate those killed. "It would be ungrateful to say that the AK Party government is not taking concrete steps regarding Alevis," Şahin stated and noted that one of the obstacles to the resolution thus far has been the inner conflict within the Alevi community itself.

For instance, like Ali İhsan Şahin, while many Alevi leaders agree on the fact that the government is taking concrete steps to respond to the needs of Alevi citizens, they also emphasize their concerns about the state officially recognizing the status of the Alevi house of worship, called "cemevi," and providing financial support for their staff. Disagreement is also manifest between some Alevi leaders, who underline that they do not want to be under the authority of Turkey's Directorate of Religious Affairs, and others, who do not see a problem with such affiliation.

Speaking to Daily Sabah, sources close to the government have indicated that the government aims to pave the way for a process which has hitherto been in deadlock. While the status of Alevi houses of worship has been one of the reasons for the deadlock, the government is currently in the process of reconciling this. Accordingly, it is said that there will be a civilian supreme board not under the authority of the Directorate of Religious Affairs which will provide a solution to the conflict. This way, the financial and recognition expectations of the Alevis will be fulfilled, since some Alevi leaders are against the state providing direct funding for Alevi Dedes.

In recent years, the AK Party government has taken numerous steps to respond to the needs of ethnic and religious minorities within Turkey. The government has initiated the Kurdish reconciliation process and the Alevi opening in efforts to officially recognize and find solutions to their problems. A series of meetings were held with Alevi community leaders, academics and others, in order to understand and define the main problems.

It is estimated that there are over 10 million Alevi citizens in Turkey, corresponding to around 15 percent of the country's population.