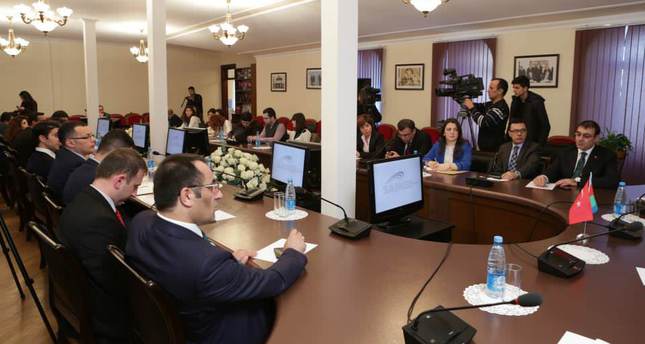 by Ali Ünal Nov 05, 2014 12:00 am
"We aim to strengthen Azerbaijani-Turkish relations in various fields, which are already strong," Dr. Farhad Memmedov said at a press conference, while evaluating the results of an event, ''Days of Turkey in Azerbaijan,'' jointly organized by the Turkish Ministry of Foreign Affairs Center for Strategic Studies (SAM) and the Azerbaijan Presidency Strategic Studies Center (AzerSAM) on Nov. 5 in Baku. "It is gratifying for me to say that bilateral cooperation with Turkey has reached a certain point and we would like to expand this cooperation level to trilateral cooperation by adding countries in our region," he added. AzerSAM Chairman Memmedov also underlined the importance in expanding cooperation with countries in the region to ensure peace and stability in the Caucasus.

SAM chairman, Professor Ali Resul Usul, on the other hand, described the motto "One nation, two states," as their main vision for bilateral relations and said, "Azerbaijan's border is the border of Turkey, Turkey's borders is Azerbaijan's border," to indicate the solid relationship between the two countries. Usul also underlined that from now on they should focus on activities to improve synchronization between the two countries.

Answering a question regarding Turkey-Armenia relations, Usul stressed that it is not possible to open the Turkish-Armenian border and normalize relations as long as Armenia continues to occupy Azerbaijani lands, which has continued for more than 25 years. "This problem must be solved in a fair manner, and Armenia's withdrawal from the occupied Azeri territories is the only way to do that. Turkey supports the concluding of political negotiations, but the solution must be fair, Usul added.

Activities for ''Days of Turkey in Azerbaijan'' were jointly organized by SAM and AzerSAM and took place Nov. 3-5. As a part of the event, a group of Turkish academics along with their Azerbaijani colleagues paid a visit to Baku, the capital of Azerbaijan and then moved on to two other cities, Qebele and Aghdam.

Participating in panel discussions titled "Political Security Dimensions of Azerbaijan-Turkey relations" and "Azerbaijan-Turkey economic relations and economic future of the region," academicians from both countries debated issues that are of importance in boosting bilateral relations. A day after the panel discussions in Baku, a round table meeting co-moderated by Usul and Memmedov took place in Qebele.

''Days of Turkey in Azerbaijan'' came after "Days of Azerbaijan in Turkey," which was held last year and a series of academic events took place in the provinces of Edirne, Yalova, Bursa, Bandırma and Ankara on Nov. 18-20, 2013.

Turkey and Azerbaijan have a close relationship in various fields, and since the early 1990s, the relationship between the two countries has been described as "one nation, two states." As in the previous event, this years' jointly organized event aimed to help the countries to better understand each other and enhance current cooperation areas.