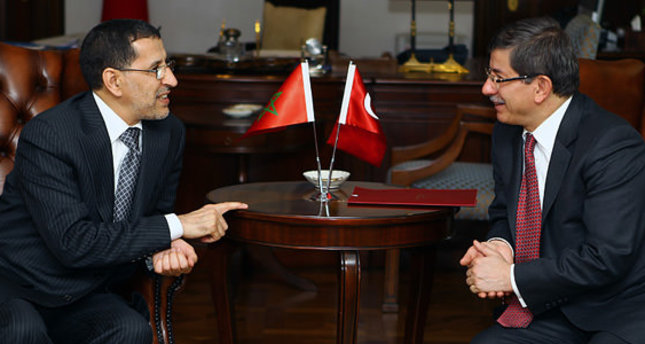 During the first panel academics held talks on the democratic experience of both countries and how the Justice and Development Party (AK Party) of Turkey came into power and aided social transformation. Morocco's ruling party, influenced by Turkey's AK Party, was also highly discussed by the participants. Hameed Bohkak of the Center for Studies and Research for Social and Political Sciences (CERSS) said that when the ruling party succeeded to run for general elections in many cities during the 2007 polls, becoming the second largest party in parliament, made the ruling party to feel like an opposition party. According to Bohak, the political experiences of President Recep Tayyip Erdoğan and the late Turkish politician Necmettin Erbakan – who's several political parties were shut down by the state and the post-modern coup – had given Moroccans an inspiration for change.

CERSS member and lecturer at Rabat's Mohammed V University, Mohammed Bin Hilal, said that one of the major obstacles that Arab nations face is that there are insufficient and few nongovernmental organizations, which makes governments the sole provider of social needs. "There wasn't political unity in this country until the 70s, but later we started to talk about human rights and freedoms, yet there is still need for a strong NGO contribution for more success," he added.

Moroccan participants raised questions regarding why Erbakan was not successful in curbing the military's influence in politics and what made his "student" Erdoğan avoid the army's attempts to have a say in politics. Columnist Ali Bayramoğlu said that the role Erdoğan took was not easy as he faced an army that intervened and staged coups almost every 10 years.

According to Professor Burhanettin Duran, Erbakan wanted to completely change the system and was harsh in his statements, thus, he barely formed a coalition government, which was later brought down by a coup. "However, the AK Party came as some sort of savior when the country was going through economic turmoil. Yes it's a party which is senstitive towards Islamic principles [like Erbakan's] but its also reformist too," he added.

In the second panel, Associate Professor Mesut Özcan, director of the Diplomacy Academy of the Foreign Ministry, focused on Turkey's policies in the Middle East and its role during the Arab Spring. According to Özcan, Turkey supported the different dimensions of transitions for the countries that were part of the Arab Spring. "Turkey provided financial aid to Tunisia, Egypt and Yemen and it also gave full support to legitimate winners of the elections. As for Egypt, Turkey gave all means of support until the military coup. With its own experience of coups, Turkey raised the strongest voice against the junta in Egypt. Overall, the instability of the post-Arab Spring era also affected Turkey," he said, adding that Turkey seeks quick recovery and success for political transition and stability in those countries.

Participants later discussed Morocco's Sahara issue and its parallel sides to Turkey's Kurdish issue and the reconciliation process that aims to end the decades-long conflict in southeastern Turkey. Academic Vahap Coşkun of Dicle University, who is also part of the Wisemen Committee, discussed Moroccan participants in the current situation of the reconciliation process and its effects in society. Coşkun said that the peaceful atmosphere was felt highly in society and that once again both sides have seen clashes that would not benefit each other. He also urged the sides to be hasty in concluding the process as it could be disrupted by those who want clashes to continue.

Speaking to Daily Sabah, Rouya Turkiyyah's Turkey editor, Ramazan Yıldırım, pointed out that Rouya Turkiyyah is the only Arabic language academic Turkish magazine. "After the establishment of the magazine, we saw that Turkey's perspective could not only be explained through a magazine, so we held talks with other institutions in the Arab world and decided to hold conferences in various regional countries. The first conference we held was six months before the military coup in Egypt. People from 10 different Arab countries participated in that conference.
People wanted to hear the success story of Turkey's ruling party and how they could benefit from Turkey's experiences," he said.

Yıldırım added that the second conference was held in Tunisia with the participation of the foreign ministers, political figures and academics. The third was held in Libya with the attendance of a Turkish minister and the leaders of the then transitional government. When asked about where the magazine will hold its next conference, Yıldırım pointed out Qatar and Tunisia as possible destinations.