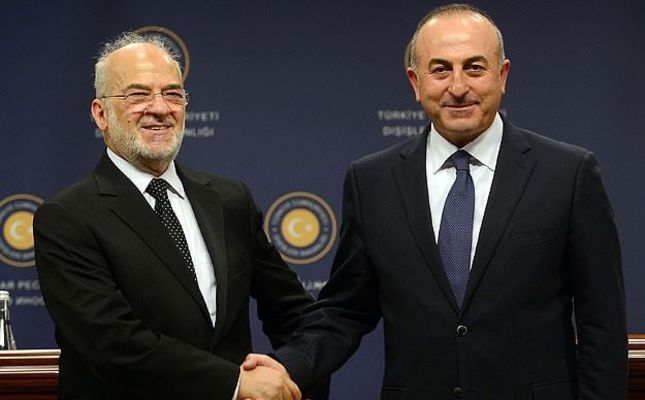 by daily sabah
Nov 07, 2014 12:00 am
Foreign Minister Mevlüt Çavuşoğlu said a "new page" has been opened in Iraqi-Turkish relations thanks to the new and inclusive Iraqi government, during a joint press conference with his Iraqi counterpart, Ibrahim al-Jafari, who arrived in Turkey for a three-day visit on Wednesday evening.

"With this visit, we can say that a new page has opened in our relations. There is a much more inclusive government now and we expect it to embrace all Iraqis," Çavuşoğlu said, referring to the new Iraqi government established on September 8.

Jafari said that the operation against the self-proclaimed Islamic State of Iraq and al-Sham (ISIS) was a national operation undertaken by the Iraqi security forces. "We are against foreign troops [in Iraq]. However, we are ready to accept all kinds of help offered to us," Jafari emphasized, adding that he hopes Turkey will continue to support Iraq.

"Iraq has never requested military support from Turkey or other countries in the fight against ISIS, however training, equipment and intelligence support will always be welcomed," Jafari added.

Jafari later paid a visit to President Recep Tayyip Erdoğan and Prime Minister Ahmet Davutoğlu to discuss mutual ties and the ISIS crisis in his country. The Iraqi parliament approved the new cabinet on October 18, a move hailed at the time by Çavuşoğlu as "an important step to an inclusive political beginning, which is essential for solving Iraq's crises."

"Our relations have deep, strategic roots," Jafari said, adding that although Turkey-Iraq relations have suffered in the past, "We should leave the past in the past and look to the future now. We should open a new page." Çavuşoğlu explained that the problems that the two countries had in the past stemmed from the previous Iraqi government headed by former prime minister, Nouri al-Maliki. "We are pleased about this new and inclusive political opening," he added, and reiterated Turkey's support to Iraq in its fight against ISIS extremists. The two foreign ministers also signed a memorandum of understanding in regard to the mutual abolition of visas for holders of diplomatic, service and special passports.