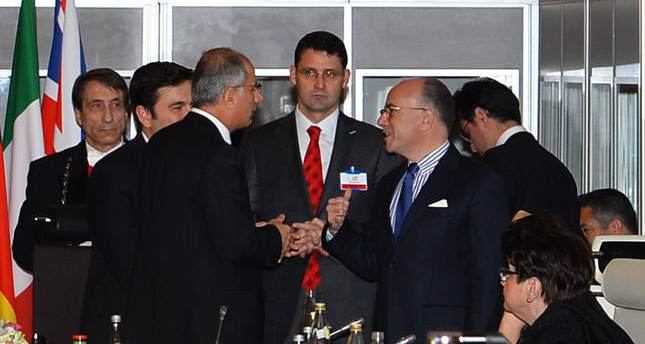 The intelligence services of Turkey and France, two allies that have called for a comprehensive policy on Syria and advocate a safe-zone along the Syrian border, agreed to share intel on foreign fighters

France and Turkey, which have been proponents of almost the same policies concerning developments in Syria, have agreed to share intelligence information over people suspected of attempting to travel to or from Syria and Iraq, French Interior Minister Bernard Cazeneuve announced on Thursday after a G6 meeting of European interior ministers in Paris. Tackling the issue of foreign fighters, Internet monitoring and migration topped the agenda between G6 European Union interior ministers from France, Germany, Italy, Spain, the U.K. and Poland. Turkish Interior Minister Efkan Ala as well as high-ranking officials from Canada and the U.S. also participated in the meeting. "We agreed that Turkey will share information on people crossing [the country] to go to Syria, and we will share with them information of those suspected of leaving France to Turkey in order to join militants in Syria," said Cazeneuve in a press conference after speaking with his Turkish counterpart.

The talks come two days after the French parliament adopted a controversial anti-terrorism law aimed at stopping French nationals from traveling abroad to fight in Syria, Iraq and other such regions.

A travel ban can be imposed on French nationals suspected of traveling to join fighters under the law, which also advocates targeting terrorism on the Internet with the possibility of blocking websites that "glorify terrorism."

France's top cop said he would recommend that other EU countries adopt the law.

"We are working together to have the same process, and we are trying to adopt the same rules in order to be more efficient in our cooperation," he said.

Asked how France is planning to deal with its nationals coming back from conflicts in Iraq and Syria, Cazeneuve said: "Of course, if they are French, (...) they will be followed by our intelligent services, and we will help them in the process of integration in society again after they serve jail time."

According to German authorities, some 3,000 citizens from western European countries, including 400 Germans, have joined the ranks of the Islamic State of Iraq and al-Sham (ISIS), among them 1,000 French nationals.

"Since the beginning of 2014, the number of French nationals leaving to fight in Syria and Iraq has increased by 82 percent," said Cazeneuve. Turkey's conditions for joining the U.S.-led coalition against ISIS include the creation of no-fly zones, secure zones in Syria and the training and equipping of Syrian opposition fighters, President Recep Tayyip Erdoğan has declared.

On a one-day visit to France last month, Erdoğan told reporters in a joint conference with his French counterpart Francois Hollande on Friday that anti-ISIS coalition countries needed to achieve these three main conditions in order for Turkey to join them.

The French president said in response, "We are going to support the three demands of Turkey."

France has previously said it supported the concepts of a no-fly zone and a safe haven on the border between Turkey and Syria in order to protect refugees coming from the town of Kobani, currently besieged by ISIS militants.

The coalition fighting the ISIS must now save Syria's second city Aleppo as moderate rebels face destruction from forces loyal to President Bashar Assad and jihadi militants, says France's Foreign Minister Laurent Fabius. In a column in French daily Le Figaro, the Washington Post and pan-Arab Al-Hayat, Fabius said the city, the "bastion" of the opposition, is almost encircled and abandoning it would end hopes of a political solution in Syria's three-year civil war. "Abandoning Aleppo would condemn 300,000 men, women and children to a terrible choice: the murderous siege of the regime's bombs or the barbarity of the Islamic State [ISIS] terrorists," Fabius wrote. "It would condemn Syria to years of violence. It would be the death of any political perspective and would see the fragmentation of the country run by increasingly radicalized warlords. It would also export the internal chaos of Syria towards already fragile neighbors Iraq, Lebanon and Jordan," he said.

Fabius' comments came just three days after Turkish President Tayyip Erdoğan was in Paris to meet President François Hollande. During that visit Erdoğan sought backing from Paris for his calls to tackle Assad as well as ISIS. Erdoğan specifically criticized the U.S.-led coalition's action in Syria calling for the focus to shift from the Kurdish town of Kobani near the Turkish border to other areas in Syria. Paris, which is taking part in air strikes in Iraq, has given Iraqi Peshmerga fighters weapons and training, but has ruled out carrying out air strikes in Syria. It says it is providing military aid and training to the ramshackle, but the only recognized and legitimate opposition group, Free Syrian Army (FSA), in Syria but has not given any specific details of its help.