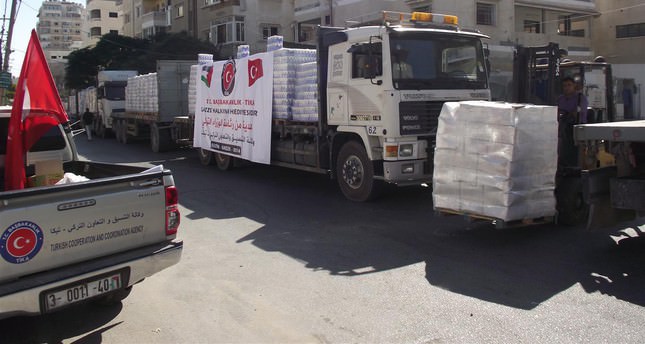 by AA
Nov 07, 2014 12:00 am
The president of the Turkish Cooperation and Coordination Agency (TİKA), Serdar Çam, is scheduled to inaugurate several TİKA-funded projects in the Gaza Strip during a visit next week to the Palestinian enclave. Çam, who is due to arrive in Gaza on Sunday, will lay the foundation stone for a TİKA-funded residential project that will include 1,000 housing units, Mohamed Mortagi, TİKA's Gaza representative, told Anadolu Agency. "TİKA is covering the infrastructure costs of the project's three residential areas and building the housing units," he said. Çam will also open seven water wells dug with Turkish funding, Mortagi said. The TİKA chief also plans to distribute financial assistance worth a total of $2 million to needy Gazan families, he added.

During Israel›s recent offensive, 15,671 housing units across the coastal strip were damaged, including 2,276 that were totally destroyed, according to official Palestinian figures.

Meanwhile, more than 2,160 Gazans, mostly civilians, were killed and some 11,000 injured during seven weeks of unrelenting Israeli bombardments in July and August. The Israeli offensive finally ended on Aug. 26 with the announcement of an indefinite cease-fire agreement.

"Turkey's international development agency (TİKA) has provided 15,000 families with food through its permanent office in Gaza under the ongoing heavy Israeli attacks," İşler said. "The Palestinian Energy Authority was provided with desperately-needed fuel," İşler said. "The Turkish Red Crescent has delivered aid basically consisting of medicine. Gaza and other municipalities' immediate needs, like generators, were also delivered." He said some injured Gazans are being treated in Turkish hospitals.