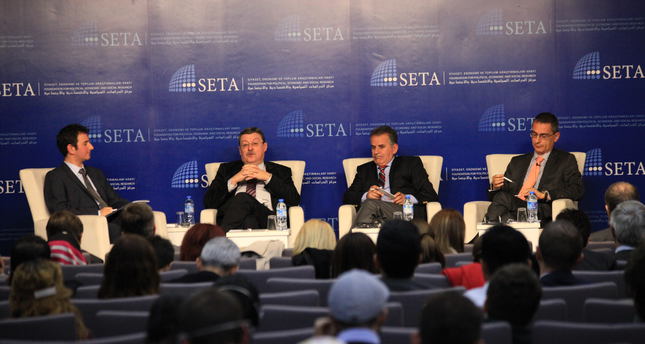 by Merve Aydoğan
Nov 07, 2014 12:00 am
Ankara-based think tank Foundation for Political, Economic and Social Research (SETA) hosted a panel on Thursday with Directorate of Turks Living Abroad and Related Communities (YTB) Deputy Chairman Mehmet Köse, Predrag Simić, a former ambassador of Serbia in France and current professor at the University of Belgrade, Rizvan Sulejmani, chairman of the Macedonian Center for International Cooperation (MCMS), and Stefano Fantaroni, first councilor of the EU Delegation to Turkey. The panel discussed the EU integration process and major political issues that the Western Balkans face today.

The panel also launched the recently published series of guidebooks for the six Western Balkan countries in Turkish, prepared by SETA researchers Dr. Mehmet Uğur Ekinci and Nedim Emin with contributions from the YTB. Following the end of the Cold War, the Balkans, particularly the Western Balkans, have been going through significant transformations socially, economically and politically. However, the EU integration process for the six Western Balkan countries, which are Albania, Bosnia and Herzegovina, Kosovo, Serbia, Montenegro and Macedonia, are still continuing.

The panel "Whither the Western Balkans?" discussed the history of the Balkans post-Cold War and how it has progressed over time and also relations with Turkey. Professor Simić made remarkable statements, saying Turkey, with its strategic depth, is one of the biggest leaders of the post-Cold War era. Simić continued his speech by providing a brief history of the Balkans and stated: "The good news for the Balkans is that there is no more war or ethnic violence. People did not learn to live together; however, at least they have learned to live side-by-side without provoking each other." He added that following recent elections, the situation in Bosnia and Herzegovina remains as complicated as ever and that France is not in the best shape to influence the Balkans any more.

Dr. Sulejmani discussed the past, present and future of Albania during his speech. Sulejmani stated that Albania has always tried to escape from the East to join the West and added that the reason behind the desire for Albanians to be Europeanized can be found in their history and identity. "Albanians being kept under pressure caused them to develop nationalism as a defense mechanism. Thus, in the history of Albanians you will always find them escaping from the East said Sulejmani." He later discussed relations between Serbia and Albania and also relations between Albania and Greece. Sulejmani stated that in order to avoid further conflicts Serbians and Albanians must have a historic agreement.

The closing speech by Fantaroni provided an overview of the Western Balkans from a European Union point of view. He said: "It is a fact that the EU, despite the perceived crisis, is still a model that many countries and regions are looking at. It is also a fact that people are looking at the EU for a better and more secure future. The enlargement of the EU will remain as the key point of the EU despite all the political disputes." Fantaroni later announced a three-part EU strategy for the Balkan accession process that includes "freedom first, economic reforms, good governance and public administration." He finished his speech by stating all political parties have to show a commitment to EU reforms.

Despite the economic crisis in Europe, European Union membership remains a priority not only for the Western Balkans but also for Turkey. The Minister of EU Affairs Volkan Bozkır, many other Turkish authorities and the president of Turkey have stressed the importance of staying committed to the EU accession process.
Last Update: Nov 07, 2014 10:31 pm