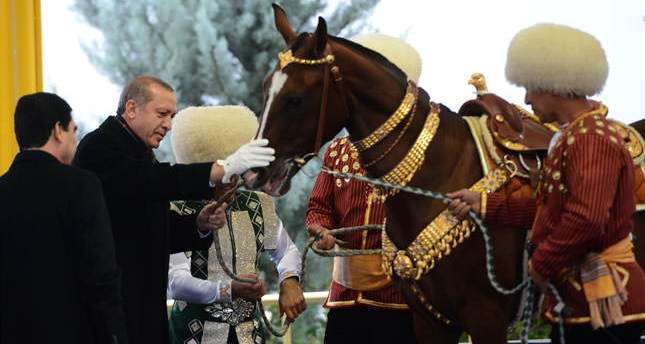 by Daily Sabah Nov 07, 2014 12:00 am
President Recep Tayyip Erdoğan has paid an official visit to Turkmenistan upon the invitation by President Gurbanguly Berdimuhamedow of Turkmenistan, where the two leaders signed various agreements and made remarks on the close ties of the two "sister" countries.

After a welcoming ceremony on Thursday, Erdoğan held a series of meetings in the capital city of Ashgabat, followed by a press conference prior to his closed-door meeting with Berdimuhamedow. Erdoğan pointed out that, as president of Turkey, his visit to Turkmenistan comes as the first to Central Asia, which consists of several Turkic and Persian countries.

The two leaders discussed bilateral ties as well as regional issues such as Afghanistan-related troubles in the region. Erdoğan said that two countries share close relations and he praised the "massive development" in Turkmenistan.

Berdimuhamedow stressed that he had the chance to talk about political, diplomatic, cultural and economic issues with Erdoğan and made remarks on the cultural ties of the two nations. "It's a fact that Turks and Turkmens share the same language, religion and culture. Our moral values bring us together," Berdimuhamedow said.

A Turkish teacher detained in Turkmenistan for allegedly beating a student was also released on Friday, upon Erdoğan's request.

Hacı Hamit Hamdi Polat was detained in May after allegedly beating a student. Polat was teaching at the Asghabat Turkish primary school, which is under the supervision of the Turkish National Education Ministry.