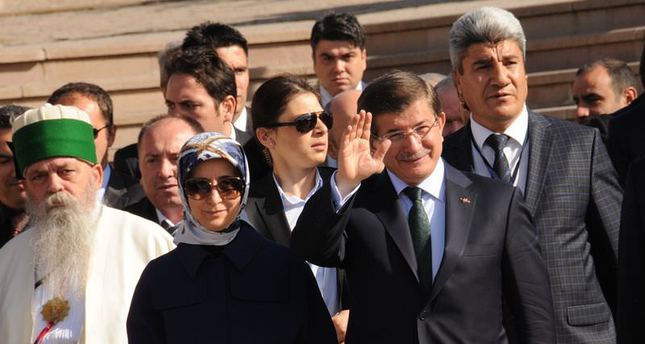 Addressing Turkey’s Alevi communities in his speech at a Hacı Bektaş Veli Ashura event over the weekend, the PM Davutoğlu called for unity and vowed to tackle the problems faced by Alevis

Prime Minister Ahmet Davutoğlu, speaking at the fourth International Hacıbektaş Veli Ashura Event over the weekend, addressed Turkey's Alevi community saying, "We should respect everyone who has different beliefs … Turkish tradition accepts different cultures living together." He said that the government will never let the unity and brotherhood that exists on Turkish soil be destroyed. "The question of the Alevi community and their beliefs should be solved by this country's Parliament and government to stop those who tried to take advantage of the Alevi question," Davutoğlu said, reiterating the government's efforts to tackle the Alevi issue.

Davutoğlu said that each tradition has its own beauty and no tradition should be imposed on those that have different opinions, adding, "When we look into the core values of the Alevi Bektaşi tradition, we are all a part of it." In recent years, the Justice and Development Party (AK Party) government has taken numerous steps to respond to the needs of ethnic and religious minorities in Turkey. The government initiated the Kurdish reconciliation process and the Alevi opening in efforts to officially recognize and find solutions to their problems. A series of meetings have been held with Alevi community leaders, academics and others in order to understand and define the main problems. Denouncing Sunni discrimination against Alevis, Davutoğlu said that all citizens are in the reality of Turkey and some of them have tried to be erased through assimilation.

"We accepted God and people together. We do not discriminate against people in terms of their religion, language and race. For years, our citizens followed the Alevi Bektaşi belief and were misunderstood," he added. Turkey's longstanding Alevi turmoil erupted over the Dersim incident, which took place in 1937 and 1938 in the Dersim region, now the province of Tunceli. The incident was considered a Turkish military campaign against an Alevi uprising after Turkey's 1934 Resettlement Law, which aimed to assimilate ethnic minorities. According to Gendarmerie reports, 13,806 people were killed and thousands more were internally displaced due to the conflict in the region. On Nov. 23, 2011, Recep Tayyip Erdoğan, who was prime minister at the time, apologized on behalf of the state for the Dersim tragedy in 1937. He also described the incidents as one of the most painful and bloody tragedies in Turkey's recent history. Since the Dersim tragedy, Alevi activists have demanded to be treated as a religious minority, including official recognition and tax exemption for their houses of worship, elective courses on the Alevi faith in public schools and greater emphasis on non-discrimination. In his speech described the Dersim incident as a modern "Karbala" – famous as the site of the martyrdom of Hussein ibn Ali, a grandson of the Prophet Muhammad – and called on the perpetrators and those responsible to apologize for the incident.