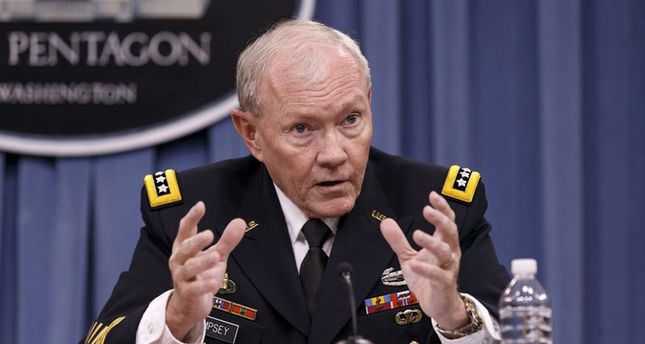 by daily sabah
Nov 09, 2014 12:00 am
The highest-ranking U.S. military officer, Martin Dempsey, said on Thursday that Israel went to "extraordinary lengths" to limit civilian casualties in the recent war in Gaza. The statement has made the officer the subject of ridicule on the international platform since the number of children killed in Israel's operations against Gaza reached 490.

Army General, Dempsey, the chairman of the Joint Chiefs of Staff, acknowledged recent reports which criticized civilian deaths during the 50-day Gaza war this year, but told an audience in New York he thought the Israel Defense Forces "did what they could" to avoid civilian casualties.

Israel was criticized for civilian deaths during the conflict, including criticism from the White House. More than 2,100 Palestinians were killed during the fighting, most of them civilians and many of them children, according to UN and Palestinian figures.

Despite Amnesty International's report on the latest Israeli operation in the Gaza Strip, which revealed that Israeli forces have killed scores of Palestinian civilians, Dempsey said in a statement that the Pentagon had sent a team to the scene of the war to investigate how Israel managed to prevent civilian casualties and see what lessons could be learned from the operation. Some of the Israeli attacks against Gaza targeted houses full of families, which, in some cases, 'amounted to war crimes', according to Amnesty International.

Dempsey's statement has sparked outrage across the world and he has come under fire by thousands, including Jewish people. One of these was quoted as saying 'Stupid loony, those you defend are child killers!'