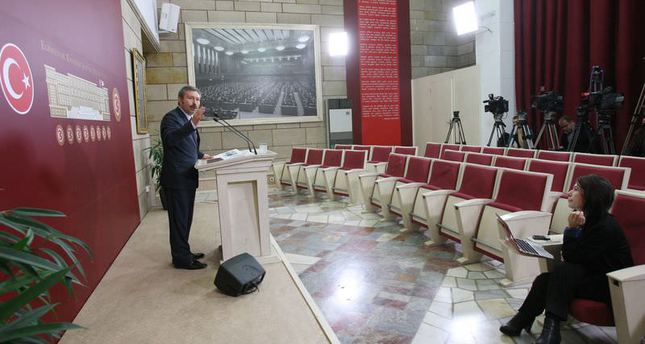 by Daily Sabah Nov 11, 2014 12:00 am
Following the announcement of the new Gülenist party by İdris Bal, who had resigned from the ruling Justice and Development Party (AK Party) in January following the December 17 and December 25 operations due to his close ties with the Gülen Movement, another deputy, İdris Naim Şahin, also announced that he will be establishing a new party.

İdris Bal's newly established party, the Democratic Development Party, has already been showing signs of failure, especially after the resignation of one of its founding members, Fevzi Bubilik, who said: "The party is far from a democratic environment." Additionally, during the Gülen-linked party's first Turkish Grand National Assembly (TBMM) press conference Bal addressed the empty seats, which became a mockery in social media.

According to local media, the prospective party to be formed by Şahin, who is a former interior minister, could be named the Anayurt Party (Motherland Party) or AYPar for short, and the suggested symbol would be a moon and sun. However, political analysts suggest the success of the party is small mainly due to such parties failing to establish a clear political program as the 2015 general elections draw closer. Furthermore, the failure of political movements throughout recent Turkish political history is descriptive of deputies who resigned from main parties.

The examples of the failures of Turkish political deputies are numerous. For instance, the political career of Erkan Mumcu, who was a former deputy for the ruling AK Party and former minister of culture and tourism, ended following his resignation from the AK Party as the media no longer mentions him. An additional example is former Deputy Prime Minister Abdullatif Şener, a former AK Party politician, who announced the establishment of a political party in 2009 called Türkiye Partisi (Turkey Party). Şener closed his party shortly after its founding in 2012 due to its failure to establish its political goals. He later aimed to join the Saadet Party (Felicity Party), but it did not happen. Another example is former Foreign Minister İsmail Cem, who resigned from the Democratic Left Party (DSP) in 2002 ahead of parliamentary elections and formed the New Turkey Party (YTP), however due to election failure it also closed and merged with the main opposition Republican People's Party (CHP).