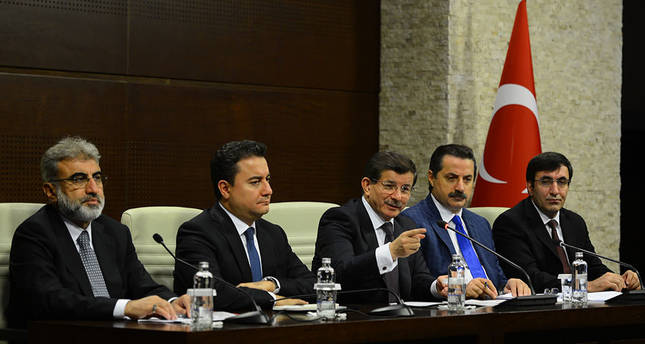 Prime Minister Davutoğlu, presenting the new regulations that will govern occupational safety, said cooperation with unions and creating awareness is key to success

Turkish Prime Minister Ahmet Davutoğlu held a press conference on occupational safety at the new office of the Prime Ministry yesterday. Deputy Prime Minister Ali Babacan, Labor and Social Security Minister Faruk Çelik, Energy and Natural Resources Minister Taner Yıldız and Development Minister Cevdet Yılmaz were all in attendance. Davutoğlu underlined that while legal regulations, workplace inspections and even stopping construction if standards are not in place, ensuring complete occupational safety requires a transformation of mentality. "Our government is determined to take all the precautions necessary and apply them in real life in order to improve occupational standards," said Davutoğlu. Davutoğlu reminded that after the major elevator accident on the day the government received a vote of confidence the main topic of the first Cabinet meeting was occupational safety and that the government will be consulting representatives of the sector before implementing any regulations. He further noted that during his meeting with labor unions he had questioned whether training sessions were being organized according to the Occupational Safety Law issued in 2012.

"I questioned whether the workers are aware of their new rights. Do they have the right to refuse getting on a certain lift? It is very easy to blame someone when such a tragedy occurs but we all have to do our share," said the prime minister.

Davutoğlu stated that the mining accident in Ermenek and the traffic accident in Yalvaç also highlighted the importance of preventing occupational hazards and accidents, adding that various departments are consulting each other in this respect.

A total of 36 new regulations have been implemented with this code while 83,000 occupational safety experts and 23,000 workplace doctors have received their respective certificates. Davutoğlu also said that in order to comply with international standards, the agreement process for occupational health and safety in the International Labor Organization's Articles 167 and 176 related to mining and construction agreements have also been accelerated with the related regulations expected to push through the General Board of the Parliament next week.

While emphasizing that all such regulations aim to ensure that occupational health and safety and working conditions are in line with universally accepted standards, Davutoğlu also underlined that unions are also responsible for raising awareness among workers. "More importantly, the sensitivity of the public and our citizens should not only be revealed after an accident. We have to be sensible and sensitive about our own safety and the safety of others before such tragedies occur. We have to strictly obey any kind of rules and standards for our own and others' safety. Safety of only one citizen is worth more than millions of dollars of income. Nothing is more important than the lives of our citizens and the pain of their relatives after an accident occurs. We felt this personally at any place we have visited that has experienced such losses," said Davutoğlu.

Workers engaged in hazardous occupations have to undergo vocational training and have a professional competence certificate.

Occupational health and safety will be a compulsory lesson at vocational high schools and faculties.

Sanctions will be applied according to a balance of reward and punishment. Workplaces without occupational accidents will be rewarded and administrative fines will be increased to a serious extent.

Any workplaces to be found overworking their employees will have their production halted. Any royalties in the private sector will be banned. Employers will be fined if they don't have standard personal protective equipment (PPE) on site.

If an employer is found culpable in fatal occupational accidents, in line with the Turkish Penal Code (TCK), he/ she will be banned from public tenders for 2 years in addition to an ordered punishment.

Chip systems will be implemented for registration and location of mine workers.

A three-dimensional plan will be compulsory for sites which have underground operations. It will be required for mining documents to be shared electronically.

Emergency drills, which were previously held once every year, will be held every six months and will be recorded.

A unit will be established for mine workers under ALO 170.

Incentive mechanisms will be created for mineral exploration activities. New regulations will be developed for the training of technical staff in mining establishments. The preparation and content of mining projects will be reviewed. Any workplace owner will be imprisoned if they continue production in a workplace halted.
Prime Minister Ahmet Davutoğlu, speaking at a press conference on Wednesday, has announced Turkey's new workplace safety regulation package, while noting that Turkey faces a three stage issue as the government needs to change the mindset of the people about safety in the workplace, successfully administer the process and implement legal procedures.

Outlining that the government is determined to take all legal measures to prevent work place accidents in Turkey, Davutoğlu stated that the government needs to re-establish a proper balance between education, enforcement and inspection about safety in the workplace and ensure that the efforts of employees are not exploited.

One of the most distinguishing features of the new workplace safety regulation package is that the government will be rewarding workplaces which have no work accidents, while placing fines on those workplaces where accidents occur. He noted that administrational fines will be significantly increased in this respect.

In response to frequent accidents in the mines, the new law will bring a number of changes to ensure safety in the mines. For instance, mine corporations will be obliged to provide 3D underground maps, while mines will be connected to above the ground through two separate ways. More importantly, each step of the mining process will be saved electronically and instantly transferred to the Ministry of Energy which will be able to monitor the situation. Of equal importance is the fact that workplace inspections in the mines and the construction sector will be conducted by video recordings and photos which will be taken by inspectors.

According to Davutoğlu 1,610 construction projects were halted following the elevator accident which took place in September, resulting in the death of ten workers.