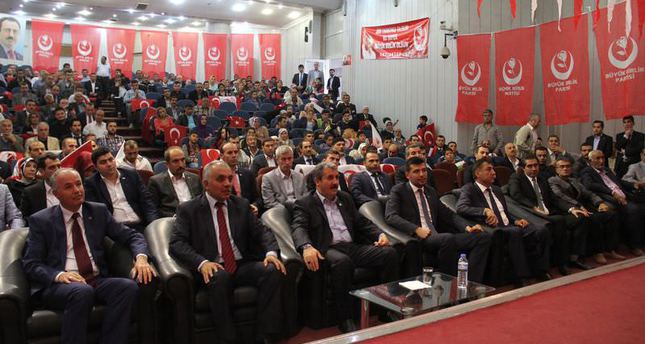 Turkey's far-right Great Union Party (BBP) was shaken by dozens of resignations on Wednesday. BBP Vice Chairman Hüseyin Bozok, who was in charge of party organizations, resigned from the party along with 77 other party members and said that the party will see more resignations in the coming days.

Announcing their resignations in a press conference in Ankara, Bozok said: "We were always proud to be members of the BBP, which was set up with beliefs and morality above politics 21 years ago … The BBP has now completely moved away from its founding ideology."

Referring to the Gülen Movement, which is alleged to have infiltrated key governmental bodies including the police and judiciary with the aim of toppling the elected government, Bozok said that the BBP turned into an operational crypto structure that speaks on behalf of the movement.

"The mentality of being deaf to remarks from the party's base and an understanding that disregards the decision-making principle based on negotiations became the dominant character of the party," Bozok said in his statement.

He further accused the party administration of victimizing the cause, values and principles adopted by party members.

Asserting that he transferred nearly 1,000 members to the BBP, Bozok said that these members would also resign in the upcoming days.

He continued that the process started with the August 10 presidential elections, and reiterated that the BBP supported the joint candidate of the main opposition Republican People's Party (CHP) and Nationalist Movement Party (MHP), Ekmeleddin İhsanoğlu, who served as the head of the Organization of Islamic Cooperation (OIC) and competed against Justice and Development Party (AK Party) candidate Recep Tayyip Erdoğan and Democratic Peoples' Party candidate Selahattin Demirtaş in August.

Bozok claimed that the party administration and members behaved in an unprincipled manner and added: "We [who resigned] agreed to stand impartial, then they referred us for party discipline. We were not dismissed, but we have friends who were dismissed."

The leader of the BBP, Mustafa Destici, announced that Serkan Tüzün, chairman of the youth branch of the BBP, was dismissed from his role for not backing the party's decision to support İhsanoğlu in the presidential election.

When asked what they are planning to do now, Bozok replied that the members who had resigned were not considering setting up a new political party, but they will discuss finding a way to serve the country.

The BBP was adversely affected in the local elections held on March 30 due to the close stance of the party's administration to the Gülen Movement. Publishing a declaration that was signed by 1,000 BBP members, a new platform within the party, the Reunion Platform, in those days highlighted the "parallel structure," a notion used to refer to Gülen Movement members' infiltration of key government bodies and said that the BBP acted against the party's principles.

Referring to the BBP's position during the rift between the government and the movement, the declaration that is expected to be published today says that the BBP did not stand in a position as it should have in the latest political polarization in the country.

The declaration pointed out that the nation's will would never be overcome by a bureaucratic oligarchy.

The Gülen Movement, led by the U.S.-based imam Fethullah Gülen, is considered to be a national security threat by Ankara. Erdoğan has since accused the movement of wiretapping thousands of people, including Turkish government officials, encrypting phones and allegedly infiltrating state institutions, including the judiciary and security forces, with the aim of overthrowing the government. Erdoğan previously said that the movement will be included in the Red Book and that fighting against the organization through lawful means will be one of Ankara's priorities.