Turkey calls for cooperation against Israeli attacks on Al-Aqsa Mosque 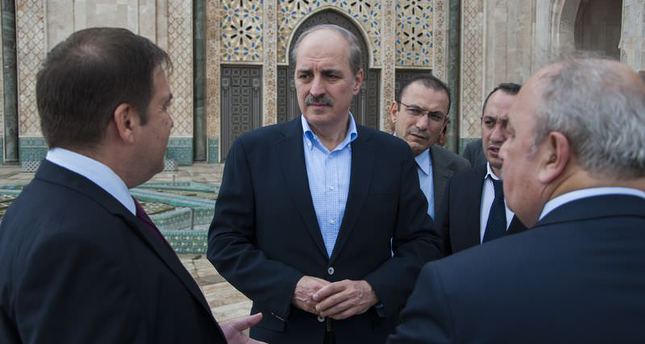 by AA
Nov 12, 2014 12:00 am
Turkish Deputy Prime Minister Numan Kurtulmuş stated on Tuesday that Ankara would call for cooperation and solidarity from all countries that are uneasy with the Israeli government's assaults in the city of Jerusalem, also known as Al Quds in Arabic.

The deputy prime minister's remarks came after the Al-Aqsa complex in Jerusalem, which represents the world's third holiest site for Muslims, was stormed last week by a group of Jewish settlers and Israeli security forces.

"We will recommend setting up an 'International Quds Foundation' as a proposal," he told an Anadolu Agency reporter at Morocco's Casablanca International Airport on Tuesday.

Jews refer to the holy compound as the Temple Mount, deeming it to be the site of two Jewish temples in Biblical times.

Kurtulmuş arrived in the Moroccan capital Rabat earlier on Tuesday to attend Wednesday's Quds Contact Group meeting of the Organization of Islamic Cooperation, or OIC, to discuss the Israeli incursion of Al-Aqsa Mosque.

"Hopefully, steps will be taken in order to protect the Islamic heritage in Quds, stop the Israeli aggression, and review the condition of Al-Aqsa, which is protected under the international law," he said.

The Turkish deputy prime minister also said they will propose the setting-up of the 'International Quds Foundation' before the OIC member states "so that concrete efforts towards protection of Quds' assets and heritage can be launched and made public to the international community."

"We will call upon all world states and circles that side with justice and are uncomfortable over the agressive attitude of the Israeli government to act jointly in a sense of coalition," he said.

He added that Wednesday's meeting was the Quds Contact Group's first. It was called for by the Palestinians. Also attending are officials from Saudi Arabia, Jordan, Egypt, Guinea, Azerbaijan, Malaysia and Turkey.

The establishment of the Quds Contact Group at ministerial level was announced at a 2013 OIC Foreign Ministers meeting in the Guinean capital of Conakry to provide support for the Palestinians.

Established in 1969, the Organisation of Islamic Cooperation is the second largest intergovernmental organization after the United Nations, with 57 member states from four continents. It serves as a collective voice for the Muslim world.

Last week, Turkish President Recep Tayyip Erdoğan also confirmed to Palestinian leaders that Ankara would start an initiative at the UN Security Council to stop the Israeli aggression in the holy compound.

"Ending the attacks by Israeli troops and Jewish settlers in Al-Aqsa Mosque compound is of the utmost importance for regional peace," he said in phone calls with Palestinian President Mahmoud Abbas and Hamas leader Khaled Mashaal on Wednesday night.

Turkish Prime Minister Ahmet Davutoğlu had also harshly condemned, last week, the Israeli raid on the holy complex, calling it "nothing but barbarity to the core."