Turkey’s aid unlike others, says Somali envoy to Ankara 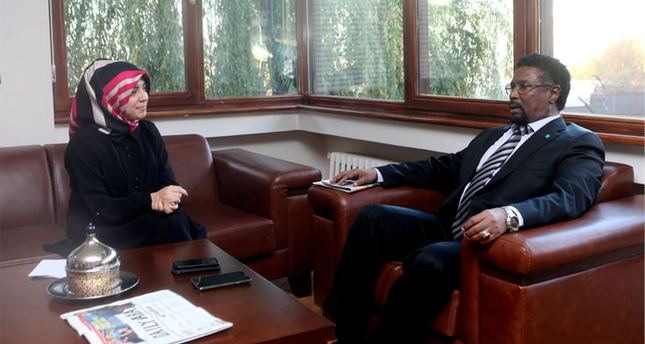 by Merve Aydoğan
Nov 12, 2014 12:00 am
The historical ties between Somalia and Turkey date back to the 16th century when the Ottomans tried to rescue the people of Mogadishu from the Portuguese navy. Since then, the historical ties between Somalis and Turks continued to develop for centuries. After the collapse of the Ottoman Empire, the Republic of Turkey began its foreign policy in Africa during early 1998. However, the most prominent effects and applications of this foreign policy on Africa began in 2011 with Somalia. Turkey's foreign policy toward Somalia can be classified as a novelty due to Turkey's aim to directly target to resolve the issues in Somalia that the entire world has forgotten since 1991.

Although Turkey recognized the Federal Republic of Somalia in 1993 through former General Çevik Bir, who served as force commander of the U.N. Operation in Somalia II (UNOSOM II), Turkey's policy failed at the time as a result of the failure of that operation. However, with the visit of then Prime Minister Recep Tayyip Erdoğan and his delegation to Somalia, the failed policy in Somalia was revitalized after 2011. Commenting on the relationship between the two countries during an interview with Daily Sabah, Somali Ambassador to Ankara Mohamed Mursal Sheikh Abdirahman, said, "The ties between the people of these two nations are growing along with the ties between the states as Turkish Airlines operate flights to Mogadishu four days a week."

Regarding future relations, Abdirahman said, "Somali would like to attract Turkish investors in fields such as agriculture and fisheries." On the issue of al-Shabaab in Somalia, which is a radical militant group linked to the terrorist organization al-Qaida, Abdirahman said the group is aiming to cut the life lines to Somalia through its attacks on Turkish authorities. "Back in 2011, al-Shabaab claimed responsibility for the killing of more than 70 people who were mostly students from among the 500 students that were granted sponsorship by the Turkish government for further education. Al-Shabaab is mainly targeting youth, especially those in need because they want to cut the hopes for the future."

Although Somalia expects foreign entrepreneurs to invest in Somalia, there is an evident security issue that goes back to the 1990s. The security issue in Somalia not only causes difficulties to Turkey but also to all Western countries. But Turkey has granted a TL 20 million ($8.84 million) budget to restructure the Somali army and police organization. Abdirahman said, "The best way to overcome the security issue in Somalia is to rebuild the Somali army [and make it] well-equipped and well-trained, which will create a more secure and peaceful Somalia." Abdirahman also added that about 120 Somali policemen have been trained in Istanbul already and that they are expecting more to be trained in Turkey. He also said that the comprehensive involvement of Turkey in Somalia, which is solely based on humanitarian aid, is greatly welcomed by Somalis. "In order to fully comprehend the appreciation of Somalis, it is best to visit and observe it in Somalia. Somalis perceive Turks different than any other nation, as we refer to Turks as our brothers. The major reason behind this is due to Turkey implementing aid directly to Mogadishu rather than making assessment and planning projects." Abdirahman also commented on relations with Somaliland and said, "Turkey having closer relations with Somaliland will not damage relations with the Republic of Somalia, rather it will be highly beneficial and crucial."