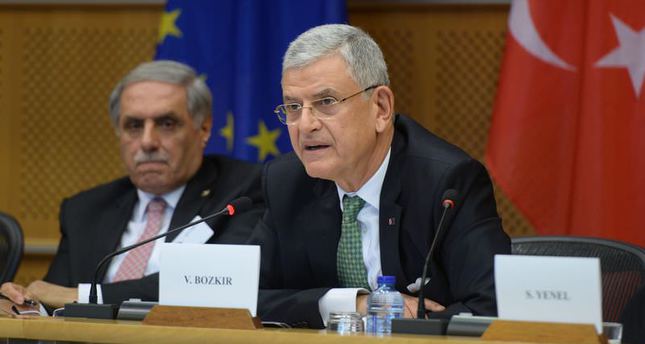 Turkey's Minister of European Affairs and Chief Negotiator Volkan Bozkır has said he holds the EU responsible for the slow speed of Turkey's accession talks, saying some member states are blocking it "politically".

Bozkır said at a meeting of the EU-Turkey Joint Parliamentary Committee in Brussels on Tuesday that, although Turkey was "committed to the EU accession process and to the reform agenda it entails ... it is vital that the EU also properly responds to our determination".

"Unfortunately, the negotiation process is not proceeding as it ought to be. The accession process has been facing resistance particularly led by certain member states. 17 chapters are still blocked on political grounds," he said.

Bozkır said if it were not for the blockage of the 17 chapters - reforms in political, economic and other areas which need to be reformed in Turkey in order for it to join the European Union - Turkey would have opened up to 28 chapters by now instead of 14 and closed about 14 instead of only one.

Out of 35 chapters, 14 chapters have been opened and 17 remain blocked, including Chapter 17 on Economic and Monetary Policy and Chapter 26 on Education and Culture, according to Bozkır.

''So, the chapters' names have been pronounced, we are ready to open any chapter, the responsibility is on the shoulder of the European Union,'' he stated.

Chapter 23 on Judiciary and Fundamental Rights and Chapter 24 on Justice, Freedom and Security are still politically blocked by the Greek Cypriot Administration despite the EU Commission's and Parliament's call for opening them.

Johannes Hahn, the Commissioner for European Neighborhood Policy and Enlargement Negotiations, said: ''It is in the interest of Turkey and the EU for these chapters to open as soon as possible.''

Afif Demirkan, Co-Chair of the EU-Turkey Joint Parliamentary Committee, said: ''The negotiation process has unfortunately now been going on for 51 years … 51 years we've been a candidate country, we are determined, we have a target.''

A dispute between Turkey and the Greek Cypriot Administration over the divided island of Cyprus on December 11, 2006, prompted the EU to freeze eight chapters.

The Greek Cypriot Administration is a member of the EU and internationally recognized by all nations except Turkey.