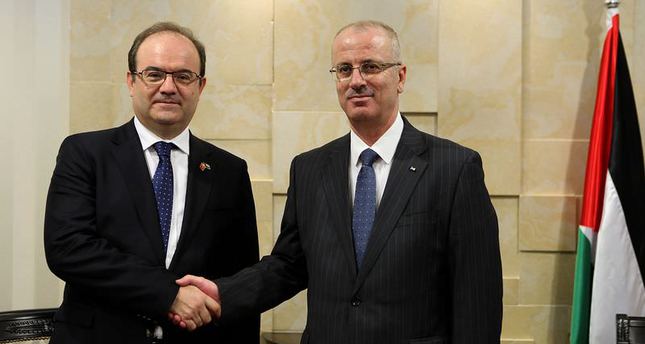 Following a meeting behind closed doors with Hamdallah, the delegation visited deputy prime minister and minister of the national economy, Mohammed Mostafa, on Tuesday. "I would like to thank the Turkish government and TİKA for being the first to help Gaza by providing help with electric facilities, housing projects and various aid campaigns. These show your sincere support to the Palestinian cause and we appreciate your help," he said. Commenting on the delegation's visit to Gaza prior to its visit to Ramallah, Mostafa thanked the officials for seeing Gaza at the scene and for the inauguration ceremony for the housing complex that will shelter 1,000 families, whose homes were demolished by Israel.

After forwarding greetings from President Recep Tayyip Erdoğan, Çam said, "We started providing emergency aid to Gaza the very first day of the war that lasted for almost two months. We later coordinated various projects and took dozens of wounded people to Turkey for medical treatment."

During Israel's recent offensive, 15,671 housing units in the Gaza Strip were damaged, including 2,276 that were totally destroyed, according to official Palestinian figures.

Meanwhile, more than 2,160 Gazans, mostly civilians, were killed and some 11,000 injured during seven weeks of unrelenting Israeli bombardments in July and August. The Israeli offensive finally ended on August 26 with the announcement of an indefinite cease-fire agreement. A recent aid campaign initiated by Erdoğan raised TL 45 million ($19.8 million).