Turkey committed to a more inclusive G20 for an interconnected world 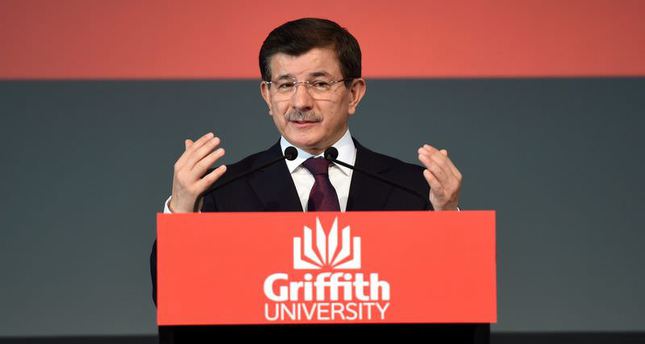 As Turkey prepares to take over the G20 presidency, Prime Minister Davutoğlu shares a vision of a more inclusive organization that listens to the concerns of the largely voiceless least developed countries

Turkish Prime Minister Ahmet Davutoğlu delivered a speech on Friday at a press conference in Brisbane, Australia, calling for a more inclusive Group of Twenty (G20), pointing to the significance of an inclusive approach, in which every nation can have a voice. Davutoğlu also stated that Turkey would expand the G20's role beyond economic cooperation and decision-making to issues such as terrorism in the Middle East, refugee crisis in Eastern Europe and the Ebola outbreak in Africa. "If the G20 agenda is limited to financial issues alone, the G20 cannot function, it cannot have international legitimacy," said Davutoğlu and continued, "during our presidency we want to be the voice of everybody." In his speech, Davutoğlu noted that current international procedures are deadlocked when the five permanent members of the U.N. Security Council, the United States, Russia, China, the United Kingdom and France, are able to issue a veto on a decision. The Turkish prime minister indicated that the structure of the G20 is more democratic and representative than the current global political system working within the bounds of the U.N.

Davutoğlu emphasized the importance of integrating less developing countries to the global economy and stated that there is no African voice in the G20 except South Africa. Davutoğlu gave Nepal as an example and said "Nepal is the center of spirituality, how can we exclude them? They have to be part of the process."

"We have opened up 25 embassies in Africa in the last five years. Many African government officials have asked us to 'be our voice' within the G20. We will be the voice of everyone during our presidency [in G20] and we will prepare the agenda accordingly." Davutoğlu was quoted as saying.

Davutoğlu noted that Turkey would mainly focus on development because not only the world's economies shrink during times when economic growth slows down, but there are also important political and economic consequences. "When we examined the 2008 crisis, it first occurred in the finance sector. Then, because it was not taken under control immediately, it turned into an economic crisis because when the finance sector cannot support the economy, various problems arise in the real sector, followed by social crises, unemployment and uprisings," said Davutoğlu. He further stated that there are very few countries that could maintain political stability in the last four years, and this political instability and change is apparent when foreign affairs ministers or finance ministers or leaders attending the G20 Summit are observed.

The Turkish prime minister called attention to multilateral trade negotiations and said, "We will focus on trade. Trade is the engine of development. Why do we have trade barriers? The best way to establish peace is through interconnected economies. Political borders should become irrelevant when it comes to trade. We should abolish political borders. The market is the best place to exchange goods, materials and culture," and added Turkey is building the world's biggest airport which is aimed at providing this interconnection.

Underlining the fact that the global crisis is still continuing in around the world, Davutoğlu noted that various important reforms and global awareness are required to overcome it. Davutoğlu said: "We need a common approach. While the G20 is an advisory, flexible forum, an international organization without strict rules, and since this advisory forum is constantly following these developments in the world, the decisions passed at G20 become norms that affect the global economy. During our presidency we will prepare and apply a consistent work schedule. In order to support development, we will focus on world trade, investments and employment."

Davutoğlu further noted that resolving any issue related to employment is a must to overcome social problems and that the real sector creates employment. He underlined that while Turkey is one of the countries least harmed by the global economic crisis, as the government they are working on bringing Turkey's economic structure in conformity with global conditions.

Davutoğlu touched on the importance of the energy gap and advocated "access for all," saying: "A life without electricity is unimaginable, and one out of five people in the world does not have electricity. No hope for the future if you do not have access to electricity."

World leaders are scheduled to come together at the 9th G20 Leaders' Summit to be held in Australia's Brisbane on Nov. 15-16. Prime Minister Ahmet Davutoğlu, U.S. President Barack Obama, German Chancellor Angela Merkel and presidents and prime ministers of many other countries are supposed to attend the summit where international economic and financial problems will be discussed.
Last Update: Nov 14, 2014 8:43 pm