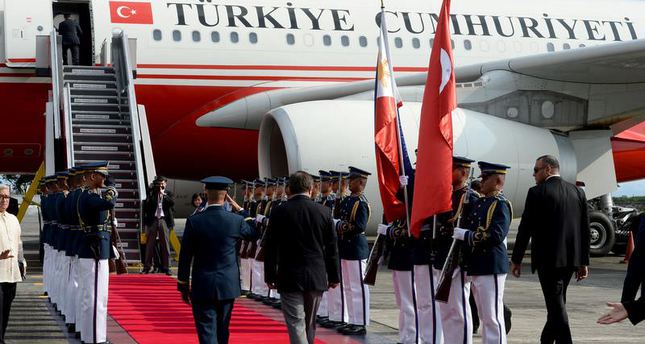 The violence in Iraq after the 2003 U.S. invasion and Syria’s support to insurgents are the cause of ISIS, said PM Davutoğlu, criticizing the way international media was trying to vilify Turkey despite all that it had done

Prime Minister Ahmet Davutoğlu, speaking yesterday on his way back to Turkey from the Philippines, has said that Turkey is constantly being accused of having links to the Islamic State of Iraq al-Sham (ISIS), and given a reminder about where ISIS leaders and most of their recruits came from. Speaking to editors-in-chief accompanying him during his visits to Australia and the Philippines, Davutoğlu said, despite repeated denials, the international media continues to try to portray Turkey as having links to ISIS, accusing them of trying to weaken the Turkish government. Davutoğlu attended the G20 summit in Brisbane, Australia last weekend. "None of the ISIS leaders came from or passed through Turkey. I'm asking you, where did [ISIS leader Abu Bakr] al-Baghdadi come from? He came from Abu Ghraib. He came from Iraq. Has Iraq or Abu Ghraib ever been under Turkey's control?" the prime minister questioned. Davutoğlu said most of the ISIS militants currently wreaking havoc in Syria and Iraq had been under the protection of the Bashar Assad regime in the past.

He said that when Turkey maintained stable ties with the Assad regime, the then Iraqi Prime Minister Nouri al-Maliki had asked him to intervene on Iraq's behalf to ask Syria to stop sending militants to Iraq.

He also mentioned a foreign minister of an important EU country, discussing with him two years ago, precautions that could be taken to prevent Europeans from traveling to Syria to join ISIS. "I asked him, 'If you know about them, why don't you prevent them from leaving your country?' He told me that as a democratic country they could not prevent people not involved in any crime from leaving. My response was, 'Aren't we also a democratic country? How can we prevent people who haven't committed any crime having access into our country?' "

Davutoğlu said that after this conversation, lists of suspicious people started arriving from other countries and Turkey had legally prevented 7,000 people from entering. "Currently, the lists are coming and the control mechanism is working," Davutoğlu said.

The crises in Syria and Iraq have pushed millions to Turkey's borders and the number of refugees that Turkey has admitted has reached the population of Boston or Philadelphia, said the prime minister. "The most successful refugee integration of the past century has been performed by Turkey," he added.

He criticized the way the Kobani clashes between Democratic Union Party (PYD) forces and the violent October 6-7 protests were portrayed by the international media. The gendarmerie raid on the National Intelligence Organization (MİT) trucks carrying aid to Syria was all part of an effort to portray Turkey as helping ISIS, he said. The PYD is the terrorist PKK's Syrian wing.

The way the international media described the PYD was biased, the prime minister argued, adding, "Syria refused to accept Kurds as citizens even when it was supporting the PKK. When our ties with the Assad regime were good, we asked him to grant citizenship to Kurds, and he did. What did the PYD do? It cooperated with Assad. The PYD was there when Assad's forces were killing Kurds."

PM: Alevi tradition does not conflict with Islam

Davutoğlu also spoke about the government's efforts to address the grievances of Turkey's Alevi religious minority. He noted the speech he made during Hacı Bektaş-ı Veli's birthday celebrations in August and said, "There, I described Alevism and Bektashism as traditions that enrich Turkey. This tradition goes back to the 12th century. When one looks at its root concepts, one sees that it is a way of expressing Islamic civilization. Alevi tradition does not conflict with Islam."

He said the two crucial measures taken against Alevis, the closure of the Janissary and Bektashi lodges by Ottoman Sultan Mahmud II and the closure of other lodges during the single-party regime before 1950, were both done in the name of modernization. "Is the AK Party [Justice and Development Party] responsible for this? When I ask this, [Republican People's Party leader Kemal] Kılıçdaroğlu asks me to answer for the Madımak [1993] and Kahramanmaraş [1979] tragedies. Were we in government then? Under these conditions, we are surprised at how Alevis vote for the CHP," he said.

Prime Minister Ahmet Davutoğlu said yesterday that the government had established an institutional foundation for the reconciliation process in order to protect it from various efforts of sabotage.

He said whenever there was some progress in the reconciliation process, which aims to end the decades-old violence in the southeast by way of providing the Kurdish community in Turkey with more rights, certain groups tried to sabotage it. "We have been through a very tough year. Gezi Park demonstrations, Dec. 17 coup attempt," he said.

In each of these incidents, there were efforts made to tie them to a societal foundation, he said. "Gezi had an urban disguise. Dec. 17 had a religious one. The Kobani protests had an ethnic one," he said. These were obstacles put in front of the reconciliation process, said the prime minister.

"There is a chance that there will be something untoward before June, 2015. We overcame some periods when people expected serious problems, like the presidential election and the appointment of the prime minister. We may face other types of obstacles and that's why we are taking some precautions," he said, adding that an institutional foundation for the reconciliation process, domestic security reform package and the medium-term economic program were such measures.

He said the domestic security reform would protect both freedoms and the rule of law. "Citizens in the east demanded that we protect law and order," he said, and argued that the security reform will support the reconciliation process.

The prime minister said that reconciliation was a natural product of democratization, rejecting the need of an outside mediator. "The Oslo process was done with mediators and it didn't work. This is something Turkey has to resolve. Citizens of Turkey need to discuss this themselves."

He said in the past decade emergency rule in the southeast was lifted, as were bans on Kurdish music, Kurdish textbooks, teachers, television and political propaganda. "This shows the state is confident. These were not rights gained by Kurds only, but also by non-Muslims and Alevis," he said.

The violent Oct. 6-7 demonstrations in the east had received no public support, he added. "The public demands law and order. There is no reason for violence. The public rejects violence," he said.

"As long as you don't resort to violence, you can do anything you want. There were some citizens criticizing our Syria policy. These are normal. But during the Oct. 6-7 demonstrations, some tried to portray Turkey as a country that persecuted Kurds. That's abnormal. Turkey opened its doors to everyone," he said.

Ahead of his return to Turkey, Davutoğlu told journalists in the Philippines that the reconciliation process is directed toward the citizens in Turkey and added that the progress of the process and economic stability along with welfare is going to increase in the region.

He added that he will visit the eastern districts of Tatvan, Patnos and the city of Tunceli to meet with Kurdish citizens to receive some feedback and show the government's determination over the reconciliation process.

Emphasizing the reconciliation process meeting held on Nov. 11 ahead of his departure to Australia for the G20 summit and the Philippines, Davutoğlu gave insight into the critical meeting: "We tackled the Oct. 6-7 [Kobani] protests and what should be done to settle down the negative atmosphere created by these protests [in the meeting]. Our government's stance on the issue is crystal clear – we have stressed since the first day [of the process] that reconciliation only yields within the scope of public order."