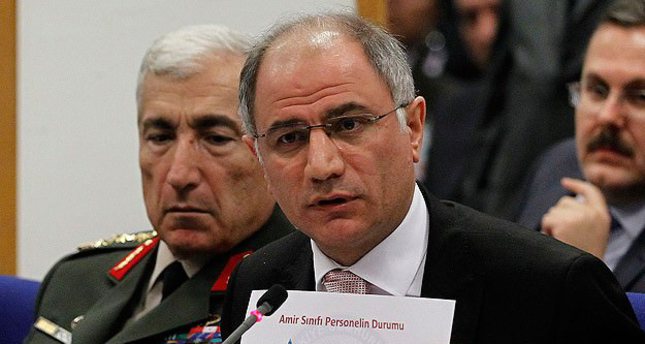 by Daily Sabah Nov 18, 2014 12:00 am
Turkish Interior Minister Efkan Ala has refuted claims that a 'security ministry' is to be established, saying there are currently no plans to establish the ministry on the government's agenda.

Some media outlets have previously reported that the government is working on establishing a security minister which Turkey's intelligence, Turkish armed forces, police and gendarmerie forces will be attached to. These allegations were later refuted by Interior Minister Ala in a question and answer session with deputies during the budget talks of the ministry.

"There are no plans to establish a 'security minister'" Ala was quoted as saying.

Ala, alluding to the budget talks, thanked deputies for their comments and assessments and said the discussions were held in a democratic order.

Ala also placed emphasize on the significance of the variety of opinions within the parliament, saying voicing different opinions on democratic platform brings benefit to the country.

Ala also touched upon the necessity of a new constitution that will invigorate democracy. "I agree with the idea that more developed democracy should be present in the country. I hope we come up with a stronger democracy with a new constitution during the next term that will last forever, with assurance provided by laws."

Ala also elaborated on the wiretapping activities some police officers—those allegedly linked with Gülen movement - were engaged in. He said 181 officers were given disciplinary punishment and there had been demands made for 460 officers' to be dismissed from their jobs, 155 of which have been accepted thus far.

"The investigation into the officers is still ongoing. We can have no issue with those who are not involved in crime. Those we complain about are involved in illegal wiretapping activities. We weed those out who exploit their authority." Ala said.

The Gülen Movement, led by Fethullah Gülen who lives in self-imposed exile in rural Pennsylvania, is accused of wiretapping thousands of people including politicians, senior officials and prominent figures among others under fake terrorism related cases as well as false identities, along with broadcasting fabricated tape recordings of government officials and their relatives as part of the defamation.

Ala made clear that such illegal activities were an assault to the sobriety of the government.

"It is a national security issue" Ala said referring to the movement's spying activities.