Erdoğan says Gülenists behind his wiretapping 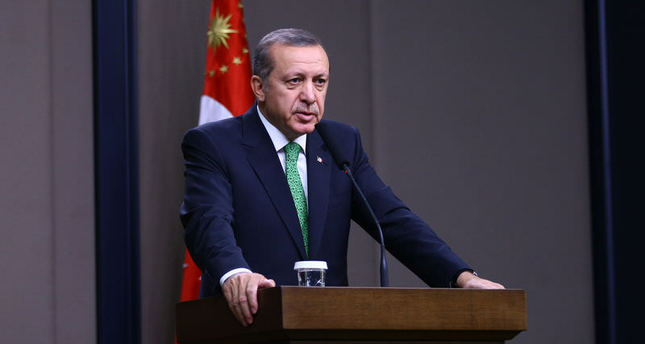 by Daily Sabah Nov 19, 2014 12:00 am
Turkish President Recep Tayyip Erdoğan, speaking to press ahead of his visit to Algeria, has said the investigation into the wiretapping of the president was definitely linked with the Gülen Movement.

The Ankara chief public prosecutor's office has prepared an indictment regarding 13 suspects, who are accused of wiretapping then Prime Minister Recep Tayyip Erdoğan, charging the suspects with "political spying" after an investigation into the alleged offenders was completed.

In response to a journalist's question at the Ankara Esenboğa airport regarding the latest incident, in which 13 suspects - allegedly members of the Gülen Movement - face charges of spying after the investigation revealed that Erdoğan had been wiretapped, Erdoğan said that the offense has a lot to do with the movement.

Erdoğan further added that the 'parallel structure', whose administration extends to Pennsylvania, is a national threat and the suggestion by the government to officially accept it as such in National Security Council is currently being assessed.

The indictment prepared by public prosecutor Durak Çetin was sent to Ankara's 7th high criminal court on Tuesday. The suspects, with alleged links to the Gülen Movement, are charged with "political spying" in the indictment and Erdoğan is listed as the plaintiff.

Hasan Palaz, the Scientific and Technological Research Council of Turkey (TÜBİTAK)'s former chief, is among the suspects.

The Gülen Movement is seen as a national threat by the government since the movement is accused of wiretapping thousands of peoplem including Turkish government officials, encrypting phones and allegedly infiltrating state institutions with the aim to overthrow the government. The movement is led by retired imam Fethullah Gülen who lives in self-imposed exile in the U.S.