Penalizing members for deadly protests not on HDP agenda 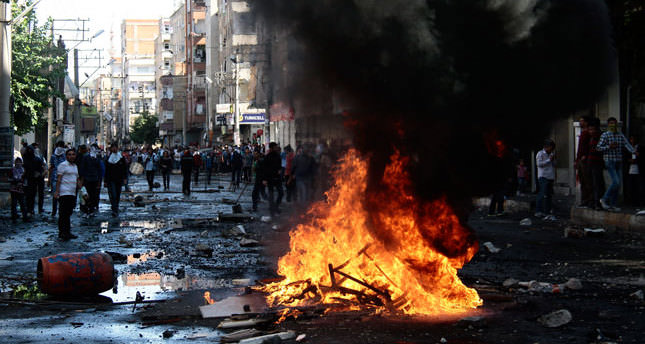 Despite claims that the pro-Kurdish HDP would dismiss party members who provoked the Oct. 6-7 Kobani incidents, the HDP is taking no concrete action against the allegedly responsible figures in its party

Following the October 6-7 Kobani protests that turned into violent clashes between pro- and anti-PKK groups upon calls of the pro-Kurdish People's Democratic Party (HDP) for street protests, the party has become the focus of anger from some politicians and citizens. It was claimed yesterday that 282 party members would be dismissed from the HDP due to their failure in managing the Kobani protests. Yet it wasn't long before these allegations were harshly refuted by the party.

In the aftermath of the incidents, Prime Minister Ahmet Davutoğlu urged the HDP to adopt a softer stance and act with common sense. Despite self-criticism by HDP Co-Chair Selahattin Demirtaş and some deputies following Ankara's remarks, the party still has no agenda on taking concrete action against the party members, who are believed to be responsible for fueling the increasing tension and having a role in the Kobani incidents that left dozens dead.

The party yesterday published a refutation regarding the claims that the HDP would dismiss 282 members over the October 6-7 Kobani protests. Certain media outlets have alleged that the HDP launched an in-party investigation after the early October incidents and the 282 members who failed to manage the process efficiently and fueled the acts of vandalism, assassinations and provocations with their remarks would be dismissed.

To calm the increasing tension and restore the tarnished image of the party after the incidents, Demirtaş stated at a press conference in October that the HDP had no idea such provocations would arise. In an interview in the Turkish daily Hürriyet in October, HDP Diyarbakır deputy Altan Tan said his party had acted irresponsibly and echoed Demirtaş's sentiments that they had failed to accurately predict what was to come, saying:

"We [HDP] should have been more careful when calling people to take to the streets. We should have considered what would happen after [the call]."

The Kobani protests undermined the reconciliation process between Ankara and the Kurds. The incidents caused the government to stall reconciliation talks due to the provocations and urge the HDP to adopt a softer and peaceful rhetoric for the sake of the process.

Early in October, the HDP called for a street protest to show solidarity with Syrian Kurdish fighters defending the besieged Syrian town of Kobani. With the HDP's call, violent demonstrations in support of Kobani erupted across Turkey, especially in the predominantly Kurdish southeastern and eastern cities claiming dozens of lives, with pro-PKK demonstrators accusing the government of turning its back on the people of Kobani in the fight between Kurdish forces and Islamic State of Iraq and al-Sham (ISIS) militants. The demonstration soon morphed into violent clashes between anti- and pro-PKK groups. Scores of vehicles, state buildings, party offices and businesses were set ablaze or damaged during the violent protests.

The outlawed PKK, listed as a terrorist organization by Turkey, the EU and U.S., took up arms against Turkey in the early 1980s so as to carve out a separate state in the southeastern region.

In a press conference held yesterday, HDP deputy Tan failed to confirm the truth of these claims and said that the party has no official statement regarding possible dismissals.