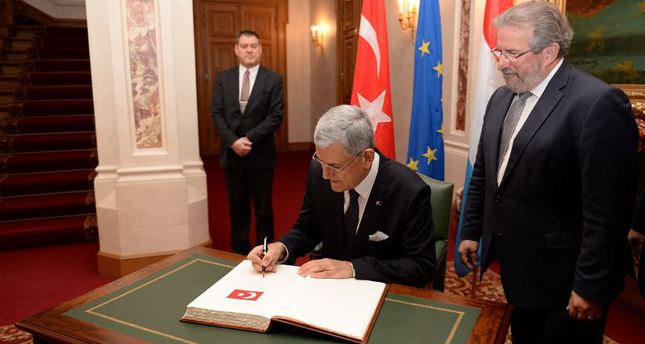 by Ali Ünal Nov 20, 2014 12:00 am
Turkey's EU Minister and Chief Negotiator Volkan Bozkır said that the government's proposed draft law called the Domestic Security Reform Package is in line with EU norms and practices and he defined the early comments on the package as part of efforts to create a negative perception.

The government has recently completed the draft law called the Domestic Security Reform Package, which aims to establish a balance between the public's freedom and security while enhancing the civilian identity of the Turkish state and it is expected to be discussed in Parliament in the coming days. Speaking to journalists who accompanied his visit to Luxembourg, Bozkır said that all the measures in the draft bill are in line with EU standards and the new police measures do not contradict EU norms. "The draft bill was discussed in the cabinet meeting for eight hours and there is no single part of the bill that contradicts EU norms and practices," he said. Bozkır also dismissed criticism that the draft bill would give too much power to the police and added that Turkey does not have any intention to enact any law or practice that is contrary to EU norms, but stressed that the government's duty is to maintain public order and the main aim of the draft bill is to reach Western standards of domestic security.

The draft bill was introduced after the violent demonstrations in support of Kobani that took place on Oct. 6-7 and claimed dozens of lives across the country. "Dozens of our people lost their lives during the Oct. 6-7 incidents, 400 vehicles and 100 schools were burned. No one can claim that these were peaceful demonstrations," Bozkır said while explaining that necessary regulations have been made in accordance with examples from around Europe. "There are many countries in Europe that accepted Molotov cocktails as weapons and the new regulation is in line with these examples," he said. Bozkır further commented that the draft bill comprises many important reforms like civilianization of the gendarmerie and criticized unfair assessment of it that degrade the reform package.

Underlining that Turkey is in close cooperation with the EU in many areas such as education: "Turkey has used 400 million euros for the project in the field of education and so far 300,000 students have studied abroad. We are also able to use 800 million euros in resources until 2020." He also emphasized that they carry out projects with the EU for the preservation of historical heritage in Turkey and that there are four excavation areas in Gaziantep operating with EU funds.

Touching upon foreign policy issues, Bozkır criticized EU foreign policy for destabilizing countries on Europe's doorstep and further afield: "Even though the EU does not have military hard power, it has acted as it does and some countries such as Georgia and Ukraine were misguided and left in the lurch by the EU." Blaming the EU for the lack of a comprehensive foreign policy strategy, he said that the EU is acting with emotion. Bozkır said, "Countries like Russia cannot be chastened by being driven into a corner. We had a fight with Russia for 300 years, but today we have good relations with them based on mutual benefits and Russia-Turkey relations should be an example to other countries. There will be more compromise with Russia if they take more roles in the international system."