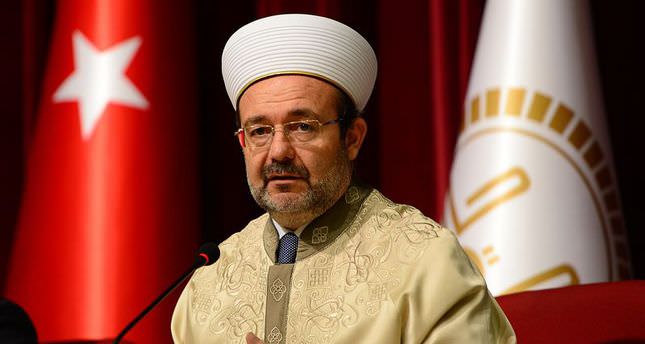 by daily sabah
Nov 20, 2014 12:00 am
The president of Religious Affairs (Diyanet), Professor Dr. Mehmet Görmez, has condemned the synagogue attack in Jerusalem that left four people dead, saying "you cannot justify an attack on another temple even if Israeli soldiers have entered the Al Aqsa Mosque with their boots and were the source of a massive provocation."

Görmez stressed that the Palestinian problem has to be solved through just and peaceful means by negotiations, and warned that violence will increase in the region if this is not done. He added "the action against the synagogue is unacceptable no matter what the reason is and who has done it."

Görmez said that the immunity of a temple is a principle of the religion of Islam, and added "Islam regards all religious temples as untouchable. Attacking temples and killing innocent people which cannot be seen as a form of seeking rights or part of a justified struggle is regarded as a great crime and sin by Islam. All measures designed to subdue people or apply violence against them will create new violent incidents. The Palestinian question should be solved in a just manner through peaceful means and negotiations. Or else this problem, which is reaching a point where it is threatening the security of humanity, will create more cruelty, terror and violence."

He added further, "The individual principle of the crime should be taken into account and those responsible for this attack should receive the punishment they deserve through legal means. However, this attack should not be used as a justification for accusing innocent people, spreading fear by oppressing them, and taking away their rights as a counter measure. This cannot be accepted. I condemn strongly all kinds of attacks on religious temples and hope peace will be sovereign as common sense and logic prevails."