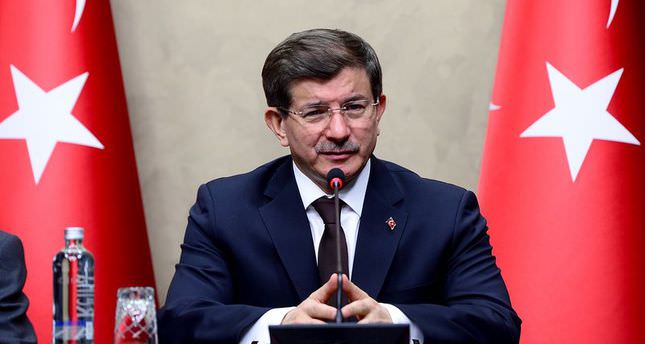 by AA Nov 21, 2014 12:00 am
Turkish Prime Minister Ahmet Davutoğlu has praised the new and inclusive political atmosphere in Iraq after he met with representatives of different political parties at the Iraqi parliament during his Thursday visit to Baghdad.

"In an extremely friendly manner, we discussed both Iraq-Turkey relations and regional developments, exchanged views and had a brainstorm," he told a joint press conference with Iraqi Parliament Speaker Salim Jabouri at the Council of Representatives building.

The Turkish PM noted that Iraq's latest parliamentary elections on April 30 were held under harsh conditions, along with security and terror threats.

However, he continued, the new parliament still managed to form the current government led by Haidar al-Abadi and appoint both a president and a prime minister.

"It is a success story in the region. In this sense, Iraq sets an example for all other nations," Davutoğlu said.

Abadi moved in September to form an all-embracing government aimed at reducing ethnic and sectarian divisions in Iraq.

It was preceded by a month of political turmoil which unseated Nouri al-Maliki and his Shiite-dominated cabinet.

Maliki and his government had been widely criticized for discrimination against ethnic and religious minorities.

In the new Iraqi cabinet under Abadi, 17 ministries were given to Shiites, seven to Sunnis, four to Kurds and one to a member of the Turkmen community.

For his part, Iraqi Parliament Speaker Jabouri pointed out the common values and borders between Iraq and Turkey, saying they would serve to ease cooperation and efforts in the fight against all kinds of terror threatening the region.

Top of the agenda in Davutoğlu's talks with the Iraqi central government on Thursday and the KRG on Friday will be: the threat from the terrorist group ISIS, relevant anti-terrorism efforts, bilateral relations in general and cooperation in energy and trade.

ISIS militants have taken over large swathes of Iraq since last June.

There has been continuous fighting between ISIS and the Iraqi army, who have been aided by Kurdish peshmerga fighters from northern Iraq as well as by U.S.-led coalition airstrikes.

In his meeting with the Iraqi Turkmen Front and Turkmen deputies, he reiterated Turkey's continued support for Sunni and Shiite-origin Iraqi Turkmen.

Many members of the minority Turkmen community were forced to leave their homes in the northern city of Tal Afar amid threats from ISIS.

"All demands of Turkmen people will be met as it is a duty for Turkey to fulfill their humanitarian needs without any ethnic discrimination," Davutoğlu said.

After concluding his talks in Baghdad, the Turkish premier departed late on Thursday for the Iraqi Kurdish capital of Irbil to meet regional President Masoud Barzani and Prime Minister Nachirvan Barzani on Friday.