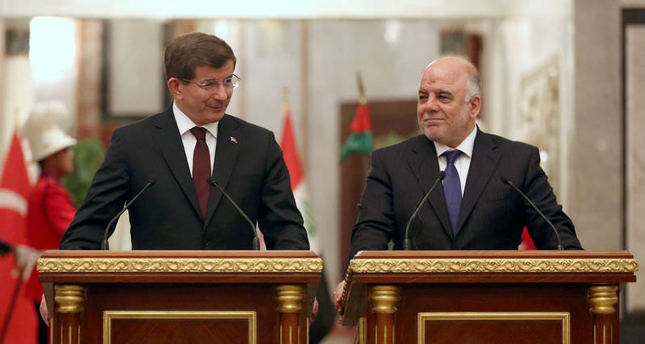 After years of tense relations between Iraq and Turkey under the Maliki government, Prime Minister Davutoğlu’s visit to Baghdad is seen by many as a step in the right direction signalling improved security and commercial ties

Prime Minister Ahmet Davutoğlu met with Iraqi Prime Minister Haidar al-Abadi on Thursday during his two-day official visit to Iraq as the new Iraqi government appears to be reviving positive relations between the two countries. After an official welcome at the main palace in the heavily fortified green zone, the Turkish prime minister held talks with Abadi in Baghdad, according to Iraqi Prime Ministry officials.

Davutoğlu is expected to arrive in Irbil, the capital of the Kurdistan Regional Government (KRG), today to have talks with KRG President Masoud Barzani. The Iraqi prime minister said in a news conference that his country and neighboring Turkey have agreed on closer security and intelligence cooperation in the face of the threat posed by ISIS. "We have a key agreement to exchange information and have full security cooperation," al-Abadi said after talks with Davutoğlu.

"The Turkish prime minister also wants us to have military cooperation in the face of terrorism and Daesh and we welcome that," added al-Abadi, using the Arabic acronym for the ISIS. Davutoğlu confirmed the two sides' agreement on closer security cooperation.

"I can say that Daesh [ISIS] threatens both Iraq and Turkey, but we will cooperate and do everything we can to stand up to terrorism," he said. He said Davutoğlu has made clear to him that Turkey was keen to have "transparent and clear" relations on the oil issue and that Baghdad would be informed of any Iraqi oil exports going through Turkish territory.

Holding a joint news conference in Iraq with parliament speaker Selim el-Cuburi, Davutoğlu said, "we cooperate with the Iraqi government against all kinds of terrorist action, whether it be from ISIS or the outlawed PKK[which took up arm against Turkey to carve out a separate state in the southeast of the country],"

The prime minister added that Turkey has eased the passage of the Free Syrian Army (FSA) and the entry of Iraqi peshmerga forces into the besieged town of Kobani to relieve the Syrian Kurdish fighters in their Kobani fight.

Political expert Professor Dr. İlter Turan, in his comment to Daily Sabah, underscored the contrast between the former and current Iraqi governments, noting that the Abadi government will be more inclusive, making it easier for the two countries to cooperate.

"Common issues such as ISIS should be tackled together. Holding talks to build reconciliation between the KRG and Iraqi central government over the oil export is also necessary," said Turan, signaling that the shaken relations during the Maliki government will be reformed with the new government.

Turan said that Maliki had followed an alienation policy toward groups other than Shiites and, even Iran had not been content with these policies and added that an inclusive Iraqi government will not alienate Iran, rather it will ease Iraq and Turkey's fight against ISIS with the support of Iran.

Bilateral relations between Turkey and Iraq were clouded during the time of Abadi's predecessor, Nouri al-Maliki, and his government. Ankara widely criticized Maliki for policies that alienated Sunnis and helped lead to the rise of the Islamic State of Iraq and al-Sham (ISIS), which controls large areas of Iraq and Syria. Yet the newly formed government in Iraq appears to be attempting to fix the soured relations as sources said that the unexpected visit came after Davutoğlu called Abadi when he took office.

Davutoğlu's Iraq visit is seen as a crucial point for furthering positive Turkish-Iraqi relations. As the second contact between the two countries after Jaafari's Ankara visit, this one is also vested with a different focus, specifically tri-lateral relations between Ankara, Irbil and Baghdad. Despite the previous efforts that failed to patch up Turkish-Iraqi relations, both sides are now more likely to succeed with the new Iraqi government.

Duran said the sectarian policies harmed Turkish-Iraqi relations, but with the new government, new cooperation has been established to deal with issues such as the ISIS threat and oil exports. Duran asserted that this cooperation countered allegations that Turkey has become isolated because of its foreign politics and proved that Turkey has firm and stable policies toward regional issues.

When asked what kind of results should be expected after the visit concerning the Turkey-Iraq-Iran triangle, Duran said even though Turkey and Iran are in agreement on some issues, there is a regional competition between the countries and a convergence of their policies on Iraq may be possible.

"Turkey and Iraq's approach may relieve the regional competition between Iraq and Turkey," said Duran.

While regional issues, especially ISIS, top the agenda of Davutoğlu's Iraq visit, Iraqi refugees in Turkey and oil exports are among the headlining topics of the visit. Turkey reportedly reiterated the necessity of comprehensive action to halt ISIS and highlighted that the main target should be the reasons behind the rise of the militant group.

The visit is important in regards to the latest energy and budget deal between the Irbil and Baghdad governments. Last Thursday, the two governments reached an accord on oil and budget issues that had heated up relations between them. According to the agreement, as a first step, Baghdad agreed to transfer $500 million to the KRG for November. In return, the KRG has agreed to allocate 150,000 barrels of oil per day for the Baghdad government. Turkey is among the countries that has supported the continued unity of Iraq and tried to defuse tensions between the two governments.