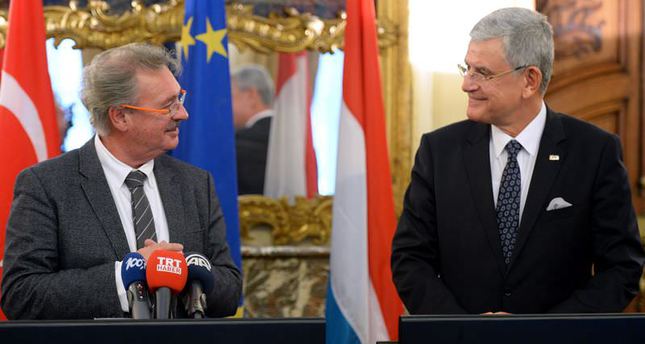 by Ali Ünal
Nov 21, 2014 12:00 am
"Turkey's visa liberalization process with the EU is on the right track and Turkish citizens will be able to visit EU member states without a visa in three years' time," EU Minister and Chief Negotiator Volkan Bozkır said near the town of Schengen, Luxembourg.

As part of his official visit to Luxembourg, Bozkır visited Schengen where the Schengen Agreement was signed in 1985, which abolished internal borders and enabled passport-free movement between a large number of European countries. He said that Turkish citizens will be able travel to Europe visa-free in three years' time. "God willing, Turkey will be a member of the Schengen area in a very short time via the abolishment of visas."

Pointing out that Turkey signed and ratified a re-admission agreement with the EU after years of negations, Bozkır added that the EU Commission's first report on Turkey's visa liberalization process, which was published in October, was positive. Bozkır underlined that Turkey already fulfilled most of the EU requirements to be part of visa free regime. "As part of the re-admission agreement there were 72 different EU requirements, Turkey has fully or partially fulfilled 62 of them already and we will meet all the requirements within three years' time," he asserted.

Under the re-admission agreement, Turkey will have to take back Turkish nationals found to be living without authorization in the EU as well as after a transitional period of three years, irregular third-country nationals if there is evidence that they reached the EU via Turkey. Bozkır emphasized that the number of illegal immigrants who tried to enter Europe via Turkey dropped significantly from last year's figure of 100,000 to 3,000 this year as part of fulfilling the EU requirements.

The visa liberalization process with Turkey will be monitored by the European Commission after three years and after fulfillment of all the EU requirements the commission will decide to allow visa-free travel or not. However, Bozkır stressed that Turkey has the right to terminate the re-admission agreement within six months if the commission does not abolish the current visa requirements.

Touching upon the prejudiced view that millions of Turks will look for jobs in Europe after the lifting of visa requirements, Bozkir claimed, "The number of EU citizens coming to Turkey will start to increase as long as economic development in Turkey continues."