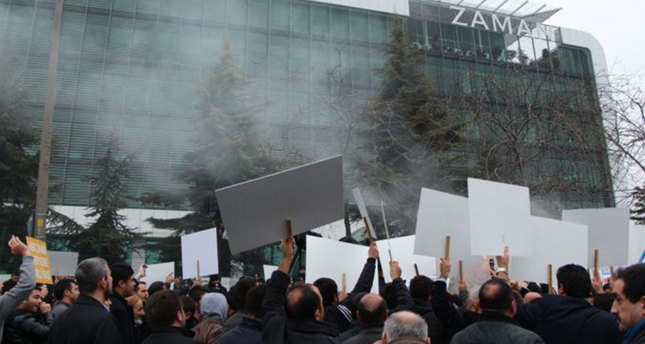 Protests have been held against the editor-in-chief of the Gülen Movement-affiliated Zaman daily, Ekrem Dumanlı, on Saturday by journalists, citizens, and various representatives of NGOs, after his entourage slapped and battered a reporter from Yeni Akit daily last week. Protesters gathered outside the newspaper building.
Yeni Akit daily's institution manager, Nuri Karahasanoğlu, made a statement to the press, saying: "This slap, with the torn apart shirt and the broken glasses, is not only an attack carried out on our reporter Mehmet Özmen, but on the press as a whole."

Özmen approached Dumanlı for a brief interview at the 33rd Istanbul Book Fair on last Sunday where the latter had an autograph session. Özmen was confronted by the editor-in-chief and his entourage who reacted in an angry manner when they found out the reporter was from Yeni Akit, a newspaper known for cricial coverage of the Gülen Movement.

Speaking to Daily Sabah, Mehmet Özmen said he was conducting various interviews with publishers at the Book Fair when he encountered Dumanlı. "I wanted to conduct an interview with him (Dumanlı) as well. As I asked him the first question, he panicked and stood up in anger," Özmen said.

Yeni Akit daily's Institution Manager Karahasanoğlu said during the protests in front the building of the Gülen Movement-affiliated Zaman daily: "We have not been afraid of those who executed the February 28 post-modern coup, and today we will not accept the 'parallel structure'."

The slap in the reporter's face is a reaction to hide the double-faced nature and manipulations of the Gülenist movement, according to Karahasanoğlu. "We want the 'parallel structure' to come to their senses, and want those responsible for the slap to apologize to our reporter and newspaper; otherwise, they will give an answer for the assault before the court," he said.

Dumanlı, a prominent supporter of the Gülen Movement, is the editor-in-chief of Zaman daily, which has been heavily critical of the government since last year in the wake of the December 17 operation to topple the government. The government has launched efforts to wipe out Gülenists from key posts in the police, judiciary and government agencies after a plot by Gülenist involving wiretapping of political leaders and journalists was revealed. Described as a "parallel structure" by President Recep Tayyip Erdoğan, Gülenists are accused of attempting to overthrow the government through its members embedded in the country's institutions.

Intolerable of criticism, the movement, headed by Pennsylvania-based cleric Fethullah Gülen, is accused of imprisoning its critics through sham trials by prosecutors and judges linked to the group. Most notably, journalists Ahmet Şık, Nedim Şener and former police chief Hanefi Avcı were jailed for releasing books critical of the Gülen Movement. Released after a prolonged jail term without reasonable cause, Şık, Şener and Avcı claimed they were targeted by Gülen-linked prosecutors and judges who leveled charges on the basis of being members of a terror network without any concrete evidence.