Parliament focus on 2015 budget this week 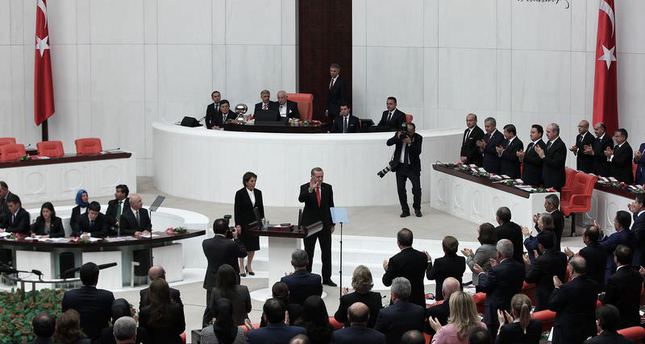 by daily sabah
Nov 23, 2014 12:00 am
This week Parliament will continue to discuss the 2015 budget of the ministries. On Monday the Planning and Budgetary Commission will negotiate next year's budget of the Ministry of Foreign Affairs, EU Ministry and affiliated organizations. The commission will continue with the Ministry of Finance and its affiliated organization's budget on Tuesday.

In the meantime, the General Assembly will convene on Tuesday and discuss the government's new judicial reform package that includes a combination of regulations it says will uphold democracy and freedom. The reform package has a critical regulation that called the concept of "reasonable doubt."

According to this regulation, if a police officer has "reasonable doubt," he can conduct searches by his own volition and detain suspects for 48 hours without a court order. This regulation was criticized by opposition deputies as a reversal of freedoms, however, in a recent interview with Daily Sabah, the Justice Ministry denied these allegations and stated that the concept of "reasonable doubt" exists in all legal systems, is in line with the European Convention on Human Rights and is currently implemented in European countries.

The General Assembly is expected to work throughout the week and even over the weekend to discuss and enact the new judicial package.

This week the Parliament State-Owned Enterprises Commission will also continue the audit. The Accounts of State Airports Authority, State Railways and Turkey Electricity Transmission Company will be audited by the commission on Wednesday and Thursday.
Last Update: Nov 23, 2014 10:25 pm